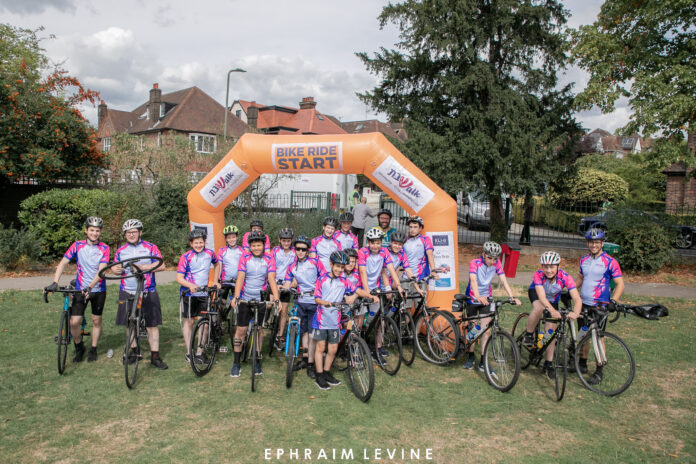 In June 2022, a group of young boys set out to begin training, determined to master a full day of cycling before participating in Shabbat Walk’s annual Bike Ride. Almost three months later, the two-day event put their skills to the test in a challenging cycling tour from Golders Green to Uxbridge and back.

Sunday the 28th of August saw a bright start for the 65 boys aged 13-17, as they gathered in Basing Hill Park for the ride of the season. These determined young bikers were biking to raise money for Shabbat Walk, a Golders Green based charity supporting families challenged with illness, disabilities, overwhelm or disadvantage. In three separate groups of riders, cycling 140, 160 and 190 kilometers respectively, the boys set off amidst smiles, waves and cheers from their proud families and friends who were there to support them.

“It builds their confidence, gives them something to strive for,” Says Avi Dubiner, one of the leading organisers of the Bike Ride. “They feel a part of something bigger as they help the community and develop their own skills.”

Accompanied by parent, staff, paramedic and volunteer marshals, the three groups all took different routes to get to their destination – Denham Grove Hotel in Uxbridge – where the troop would spend the night, before cycling homeward on Monday morning. The groups took a half-way pit-stop at the Sarratt Village Hall where they were treated to a buffet of food and drink to rejuvenate them for the rest of the ride. With routes planned by volunteer Asher Moszkowski, each rider had the opportunity to stretch their capabilities while seeing picturesque scenery and helping a local cause. Also notable on the bike ride was the boys’ respect for each other which, according to one parent was “A breath of fresh air.”

Upon arrival at the hotel for the night, the riders were greeted with a fantastic meaty buffet supper and time to swim in the hotel swimming pool. After davening and breakfast in the morning, the riders once more donned their helmets and prepared for the second lap of their journey. As the riders left, the hotel staff thanked CEO Eliezer Gilbert for the impeccable behaviour of the boys involved and how clean the rooms were. Commenting on the atmosphere of the trip, Eliezer said that “The team spirit displayed from boys helping each other during the ride was beautiful to witness.”

As the team rode to the Finish line in Princes Park, their families came to greet them, amazed by the tenacity of the boys, who were exhilarated by their own accomplishment. Barry Gross, father of a 14 year old rider, shared about his son that “He reminded me that we are capable of so much; all we need to do is try.” Other parents mirrored Barry’s comments with great praise for their children, and for the impeccable organisation involved in the bike ride, including consistent parent contact and high standards of safety with marshals on bicycles, in cars and vans along the route. The huge achievement of the boys was only possible through the careful planning of Eliezer Gilbert, Avi Dubiner and Avigayil Gilbert of the Shabbat Walk team, who worked tirelessly to ensure all details were considered. As the riders rest up after a full couple of days cycling, they thank the organisers saying “Thank you so much for an amazing bike ride, looking forward to next year’s already!” With a whole year until then, Shabbat Walk’s successful Bike Ride will doubtless be the precursor to many successful projects in the year ahead