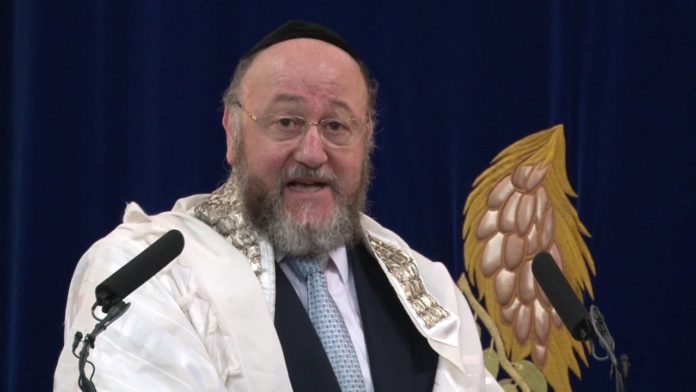 Leading members of the Jewish community, including religiously observant figures, have for 3 or 4 weeks now, been looking for a well-recognised person to publicly speak out against the current Labour party. And this week it came, with maximum publicity and a solid blow to Jeremy Corbyn, just two weeks before the general election.

This wasn’t easy for the Chief Rabbi to do. For those who know Rabbi Ephraim Mirvis, he is an extremely thoughtful articulate individual with the highest level of understanding and general knowledge of current events. Rabbi Mirvis would have given, careful consideration to the consequences of his words in the Times newspaper, but with his wisdom, he felt he had no choice but to speak up for the overwhelming number of British Jews who are deeply concerned about a Labour minority government.

The backlash especially on social media was rife with hatred and attacks on the those “undermining” their leader. Some asked, “where is the evidence?” while others insist “it’s just a coordinated campaign to oust Corbyn.” Some opine that “it all lies.”

Even the Jewish Labour Movement have said there are hundreds of outstanding anti-Semitic cases within Labour still to be dwelt with.

The cover up and bullying of mostly non-Jewish staff, at Labour HQ according to the BBC Panorama show was astonishing. These were staff members who were leaned upon and bullied, so they would ignore cases like, Labour members blatantly questioning the Holocaust or that Jews had too much influence over government, the media and the economy.

Labour in response says anti-Semitism accounts for only 0.1% of the Labour party membership and that Labour would guarantee security for the Jewish community and defend and support its way of life. But this figure of 0.1% is simply ridicules.

When Jeremy Corbyn became leader in 2015, he allowed a large space of anti-Semitism to flourish, and it has since grown like a huge cancer. Even Margaret Hodge who is standing for re-election to become Labour MP for Barking said this week that anti-Semitism within Labour had got worse this past year.

If anti-Semitism has grown so significantly within Labour and Jeremy Corbyn is only the opposition leader at this time, how much worse could it be if he became Prime Minister.

Corbyn’s repeated insistence that he and the party are tackling anti-Semitism is not true. If there are hundreds of outstanding cases, then clearly, Labour are dragging their feet and feel there is absolutely no urgency. And still the Labour leader refuses to take responsibility. Have we forgotten how Jewish (and non-Jewish) MPs were hounded out of the Labour party under Corbyn over the anti-Semitism crisis?

This is what makes the Jewish community nervous and this is why the Chief Rabbi felt compelled to speak out against Her Majesty’s Opposition. It is not scare mongering or stoking the coals of fear. Rabbi Mirvis carefully considered all aspects of his words and they do reflect the anxiety within the community. We therefore need to fully support the Chief Rabbi.