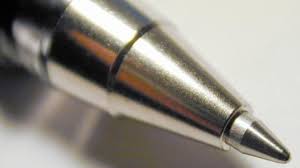 Finally, after years of trying, China rejoices a ballpoint pen breakthrough. According to sky news, China has finally produced its own fully home-produced ballpoint pen after years of trying to master the complex techniques involved in making the delicate tips.
Despite manufacturing 80% of the world’s ballpoint pens, the country had previously been unable to produce the small but crucial component.
Now, state-owned steel firm Taiyuan Iron & Steel has announced it has finally cracked it.
So why did a country renowned for ingeniously replicating technology struggle to create an everyday item for so long?
Firstly, it did not have machines with the precision needed to cut a tiny ball-bearing accurately, meaning the balls had to be imported from Switzerland.
And despite being the world’s largest steel producer, China was unable to produce the high quality steel to case the ink-dispensing ball, resulting in the steel being imported from Germany or Japan.
The national concern about the issue is so high  that, in June 2015, state-run broadcaster CCTV hosted three manufacturing chief executives in an hour-long talk show discussing what the country could do to solve the problem.
And the dilemma made headline news last year, when Chinese Premier Li Keqiang complained on national TV that the country’s pens were “rough” in comparison with their Japanese, German and Swiss counterparts.
His comments led the Hong Kong Economic Journal to declare: “The day China can produce a 100% homemade ball pen will be the day it truly qualifies as a first-class industrial power.”
Following the announcement, CCTV posted a video on social media site Weibo asking its followers to cheer for the momentous achievement.
China is now hoping to phase out pen tip imports completely within the next two years.