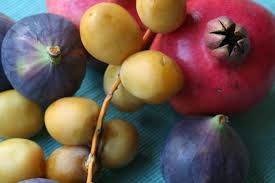 They heard the reports and they had seen the actual fruit. They had personally witnessed the gigantic grapes hauled back by the spies. They had gazed at outsized figs and succulent pomegranates. Additionally, they recalled Moshe’s promise, decades earlier about a land of milk and honey. It was finally time to transition from monotonous manna to luscious fruit and abundant produce. Finally, they could take leave of the sandy desert and enjoy the lush pasturelands of Israel.

Moshe doesn’t disappoint them. He lists seven varieties of crops and fruits which are indigenous to the land of Israel: wheat, barely, grapes, figs, pomegranates, olives, and honey. This catalog is a balanced list of basic grains for nourishment, essential fruits for both vitamins and commerce, as well as scrumptious delicacies.

It is uncommon for one single region to yield both grains, as well as olives and pomegranates, fruits which typically require tropical climates. Yet, Israel is outfitted for both, precisely because it isn’t a specific region. Instead, it is a microcosm of all the world’s regions, and it covers a broad range of climates and topographies. Everything can be found in this magical land of Hashem.

Fruits and cops in Israel are more than just edibles. The epic saga of Shir Hashirim portrays a legendary courtship between a king and a peasant girl, which, in reality, is an allegory for our relationship with Hashem. At various points in the story, the woman, or the Jewish people, are compared to grapes, pomegranates, wheat, figs, and honey. The “fruits of Israel” are poetic metaphors for the beauty of the land and the

splendor of its people. Hashem conveys his love to us both through fruit metaphors and also, by providing actual produce. Moshe channels the mystique of these fruits to excite the people about the land of their future.

Interestingly, Chazal viewed these iconic and visually appealing fruits as a handbook of halachik measurements. These fruits aren’t only symbols of the land’s fertility, they are also codes for halachik measurements and quantifications, known as shiurim. For example, wheat assists us in determining tzara’at impurity. If someone lingers in a house afflicted with tzara’at long enough to consume wheat bread, he becomes impure. Similarly, figs represent the minimum “size” of food which, if carried from private to public domain on Shabbat constitutes a violation of the melacha of hotza’a. Of course, everyone is familiar with olive-sized ‘k’zayit’ shiur which governs the halachik act of eating. The fruits aren’t just romantic symbols of our love with Hashem and His land, they are also halachik instruments affecting a wide range of halachik applications.

What are these seven fruits and crops? Are they beautiful embodiments of the land of Israel or are they halachik codes? In truth, they are both, since our association with the land of Israel is both halachik and poetic. The fruits convey a dual metaphor reflecting the two modes of our love for Israel.

A land of commandments

The midrash frames Moshe’s request for entry into Israel as a desire to fulfill mitzvoth which weren’t compulsory outside the land. Living in Israel, in the immediate vicinity of Hashem, requires and invites greater halachik dedication. It is inconceivable that the presence of Hashem

doesn’t also mandate greater halachik obligation. The closer we stand to Hashem and the more intimate our relationship, the more augmented our duties and our commandments.

Entire systems of halacha pertain only in Israel, from agricultural laws to national obligations such as building a mikdash, appointing a king and eliminating idolatry. Moreso, the Ramban asserted that all mitzvoth are limited to the land of Israel. Mitzvoth outside the land of Israel are merely rehearsals for authentic mitzvah performance upon our return to Israel. Our tradition has rejected this extreme position, but this opinion captures the spirit of “augmented” halachik responsibilities in Israel.

For this reason, Chazal deciphered the seven fruits as codewords for halachik information. The orchards and wheatfields of Israel are legal manuals guiding our adherence to halacha.

Our relationship with Israel, though, must not be reduced purely to “halachik calculus”, and cannot be appreciated solely by assessing how many extra mitzvoth apply in this land. This type of halachik calculus generated a radical position asserted by a 12th century Tosafist named Rav Chaim Cohen. He argued against emigration to Israel, as immigrants would become entangled with unfamiliar halachot which are difficult to adhere to. Instinctively, we disagree with this attitude and bristle at the notion of avoiding halachik responsibility – even if the halachik duties are complicated and challenging.

This extreme 12th century position highlights a general tendency to frame our relationship with Israel and with redemption, purely through halachik models. This is understandable, given that we have absolutely

no tradition about redemption, and we are advancing along uncharted historical territory. This is the first time that we are experiencing redemption without prophetic guidance. In the absence of any concrete masorah about redemption, it is reasonable and even logical to fall back upon halachik paradigms for guidance.

The issue, however, is that redemption, by definition, doesn’t naturally fit into halachik models. Redemption is a history-altering experience which awakens the deep soul of Jewish consciousness. It is a historical lyric sung by The Jewish imagination throughout the generations. The sound is growing louder as Hashem calls us back from the wastelands of exile urging us to partner with him in the closing chapter of human history. This divine echo can’t be construed through the halachik terminology of obligations and prohibitions. Of course, we cannot, G-d forbid violate one iota of halacha in the “service” of redemption, however, redemption can’t and shouldn’t be understood solely through a halachik lens. Redemption is a poetic leap of the Jewish imagination- a return to the orchards and olive groves of our past romance with Hashem.

Often the issue of reciting hallel on Yom Ha’atzmaut is incorrectly viewed as a barometer for a person’s commitment to the redemptive experience. It is perfectly legitimate for someone to decline to say hallel based on numerous halachik considerations, while still deeply identifying with this historical process. Redemptive attitude cannot be gauged through halachik instruments. It is too personal and too historical.

Likewise, the question of whether living in Israel constitutes a mitzvah is often cited, when discussing the redemptive nature of the state of Israel. Only if there is an actual mitzvah to live in Israel, the argument

goes, should 1948 be defined as redemptive. Famously, the Rambam omitted living in Israel as a mitzvah. Does that mean we should be less devoted to the process? Again this is a misapplication, as, ironically, living in Israel may be too large and too seminal to be shrunken into a specific or narrow mitzvah. It may be too seminal and too important to be listed among the roster of 613 activity-based mitzvoth. Again, a halachik model- in this case defining an act as a mitzvah-may not be capable of fully capturing the spirit of redemption.