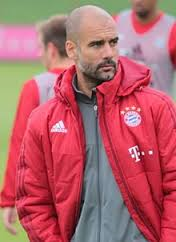 Manchester City manager Pep Guardiola has refused to blame his tactics for Manchester City’s shock defeat at the hands of Monaco in the Champions League round of 16 last week, in his interview with sky.

Man City crashed out on away goals after a 3-1 defeat at the Stade Louis II, despite coming into the deciding game as clear favourites to progress given their 5-3 advantage from the home leg.

But the Catalan stood true to his tactical approach for the game, claiming his inability to motivate the team for the first half was his downfall.

“All managers make mistakes but I don’t think it was down to a tactical mistake.

“But the problem was the first half. We weren’t there. We wanted to show personality, not to let them think, but they could pass and pass the ball. We forgot to do that in the first half.

“My mistake was being not able to convince them to do that. I did in the second half but it was too late.”

City’s only real hope of silverware now lays in lifting the FA Cup, with Arsenal to come in the semi-finals of the FA Cup.