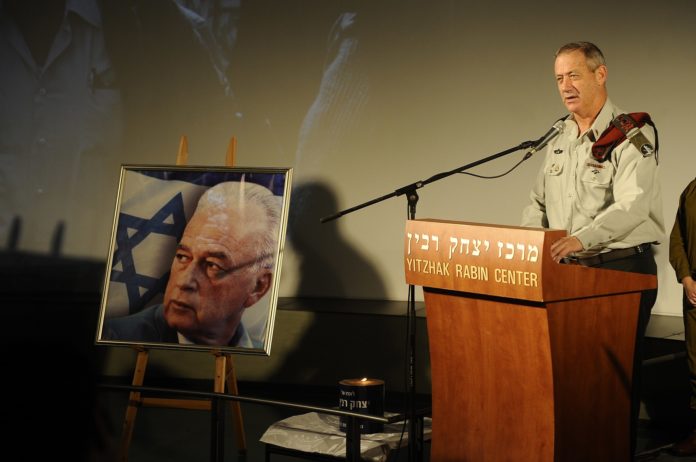 Regional Cooperation, Minister Tzachi Hanegbi, was jeered throughout his speech at a memorial rally for former Prime Minister, Yitzhak Rabin, in Tel Aviv on Saturday night.

Thousands of people attended the event.

Chants of “Get off; apologise!” could be heard during Hanegbi’s address, though he attached “no importance” to the booing.

“I was speaking to people at home for whom it was important to hear my remarks,” he told reporters.

A vociferous audience called on Hanegbi to apologise for events at a 1995 rally against the Oslo Accords at Zion Square in Jerusalem a month before Rabin’s murder.

But Hanegbi refused to apologise.

“I wasn’t on that balcony. I wasn’t at that rally with the incitement speeches. I’m proud of the struggle I conducted against the Oslo Accord  It was legitimate,” he said.

“The attempt to attribute the actions of one zealot – (Rabin’s murderer, Yigal Amir) – to half of the people was unsuccessful.

“I spoke to the people and to the people’s hearts. It was very important that the things in which I believe would be heard on this stage, without trying to pander to the audience.

“My speech was about us being one people and that message was important.”

“It’s important for the voice of the right-wing, the national camp, to be heard here,” Hanegbi added.

“We won’t leave the sadness and the longing we have to the other side of the political map. Our pain is the same, and therefore I’m glad I came. I was sorry I was the only one who agreed to come.”

“It’s regretful that the memorial rally for Prime Minister, Yitzhak Rabin, was turned into a political conference,” he tweeted.

“Those who herald the freedom of speech are trying to silence anyone who disagrees with them.”

“It wasn’t the right-wing who murdered Rabin; it was Yigal Amir.

“As a right-wing leader who opposes a Palestinian state, I’m tired of the false accusations made yearly by the left-wing.

“Right-wingers don’t need to come to a protest meant to denunciate the right wing. The conclusion of the radical left is that the right wing is to blame.

“My conclusion is – no more violence and “no” to civil war. You pick.”

“This story of incitement on both sides is a tale that allows Netanyahu to hide his inability to face the public and say, ‘I made a mistake – we incited. We didn’t shoot; Rabbi Dov Lior was the one behind the murderer’.

“Reconciliation will only come after those responsible for the incitement are able to look the public in the eyes and say “We made a mistake.’”

Hanegbi had told a packed crowd that Jerusalem and the Second Temple came to ruin because of hatred.

Linking those events to Amir, he noted, “The murderer of Yitzhak Rabin was willing to bring another ruin on us.

Slamming the Oslo Accords as a “bitter mistake,” Hanegbi continued, “When the killer took the Prime Minister, I, and everyone else, my partners in that political struggle, felt exactly the same as the Israelis on the other side of the ideological divide – immense pain and sorrow.

“Had I been there, I would’ve taken the bullet for Rabin.”

He added, “We must always remember we are all brothers.

“That is the way to preserve our country together, the country whose existence Rabin fought to protect. He was murdered because he acted based on his beliefs.   I did not agree with his beliefs, but they were nevertheless his beliefs.”

The Darkenu movement organised the rally but withdrew leading up to the event.

“I wouldn’t have invited Hanegbi to the rally,” Meretz leader, Tamar Zandberg, said.