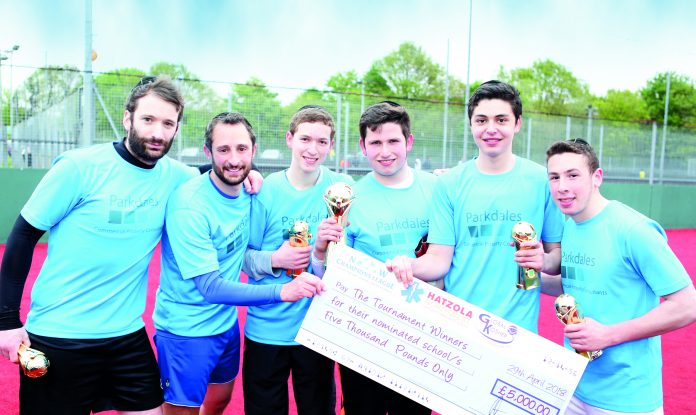 On a cold wind-swept Sunday afternoon this week, over 1000 people descended on Power League in Mill Hill to enjoy a special community event that has had many families requesting yet again that it continues to be an annual fixture in the community calendar.
For the second time, a combined 5-a-side tournament and Fun Day allowed entire families to enjoy themselves in a warm and friendly atmosphere. The tournament sponsor – Moshe Feldman CEO of Global Kosher who facilitated the huge success alongside 24 team sponsors and other event supporters was delighted at the incredible exposure that the event generated and in particular the financial benefits for event-partner Hatzolah NW. With such a strong show of support by so many families, next year’s event could iy”H be even larger.
With 24 sponsored teams and approximately 160 players representing NW London schools from across the educational spectrum – both primary and secondary, the competition was keenly contested with a prize of £5000 for the winning team to benefit their chosen school, all in a spirit of respect and camaraderie.
Arie Cohen of Daco Design, who headed the committee organising this event explained “After Sukkos, people were already telling me I had to arrange another event, so we went for it. To see hundreds of boys cheering for their fathers would warm anyone’s heart! The best part was that a lot of tzedoko was raised from an afternoon of pure competitive fun!”
After a hard-fought tournament, the spectators and players were honoured to have popular local Councillors Dean Cohen and Shimon Ryde present the Global Kosher Cup together with the cheque of £5000 to the winning team sponsored by Parkdales who will be donating the prize to their chosen school Menorah Grammar.
The runners up who played such a big part in providing a thrilling finale were sponsored by A1 Building Supplies Ltd and represented Noam Primary School. They also received their runners-up trophies amid thunderous applause in appreciation for their conduct and sportsmanship throughout the rip-roaring final which was decided on a tense penalty shootout.
After winning, Yomi Cohen, the captain of the winning team said “It was a well arranged tournament bringing the finest talent in NW London together. It was a pleasure to be part of it and win it for MGS. We look forward to joining again next year!”
To augment the event, a group of ladies from across the community arranged an unforgettable funfair with an array of stalls, rides and culinary delights provided by Itzik Caterers and Uncle Duvy. From donkey rides to bungee jumping, tombolas to balloon modelling, every age group – even the very youngest – was thought of including a toddlers corner and puppet show which were in constant demand throughout the afternoon. Even the police and fire brigade were in attendance allowing the crowds to “try out” their vehicles and build a rapport with the members of the community alongside Hatzolah NW members who gave the youngsters a tour of one of their ambulances.
For the older boys, pitches were made available for football training which kept them busy right up to the end of the day.
On hand to secure the event was the ever-dependable KASPA security group headed by Michael Green who, along with a team from Shomrim NW, were able to ensure the safety and wellbeing of such a large crowd.
Many messages of thanks were conveyed to the members of the committee including one from the Power League manager who said “It was a pleasure to work alongside all of you”. Also many families enthused how much they had enjoyed the heimishe atmosphere and achdus from across the NW community.