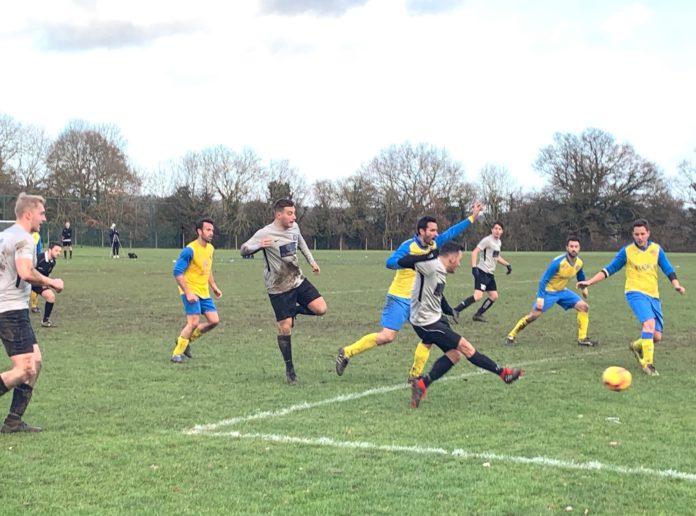 HMH top the Premier Division after a thrilling 3-2 win against Oakwood at The Hive.

Avi Goldberg’s team hold a one-point advantage over Hendon United Sports, whose match was postponed as Camden Park forfeited the clash. But there was controversy as Oakwood boss Daniel Kristall questioned why there was no injury time with his side pushing for an equaliser.

“We got ourselves back in the game but the second half was called short after just over 44 minutes,” he said. “There were stoppages for injuries, substitutions and lost footballs so were expecting another six or seven minutes but out of nowhere came full time whistle. It was very odd.”

Regarding the action, HMH displayed a cutting edge against an impressive Oakwood outfit who are looking good for a cup run this season.

Dom Feldman pressed Oakwood into gifting HMH the lead with an own goal. George Goldberg then crossed for Nate Kashket to double the advantage only for Josh Cuby hit back for the visitors.

Jacob Shapiro kept HMH ahead with a number of smart saves before a Feldman strike ricocheted off Oscar Wagner for a 3-1 advantage.

Dan Selwyn fired home a wonder strike from long range on 88 minutes but Oakwood could not an equaliser as HMH took the spoils.

“This was by no means a vintage performance,” commented Goldberg. “We found it hard to play our game and credit must go to Oaks but we made our chances, in particular a well worked second goal through Kashket to secure the points.”

Kristall noted, “It was a tough game, a draw would have been a fair result. We battled well after going a goal down to an unfortunate own goal and dominated for large parts.

“We still have lots to play for in cup competitions and fighting for points in the league. But good luck to HMH, they’re a good side, between them. It should be a fascinating title battle with Hendon.”

Maccabi London FC Blue are in third place just four points back from leaders HMH after a comfortable 4-0 win against bottom of the table Fairlop at Rowley Lane.

Charlie Ezra scored his first top-flight hat-trick for the club.

“We’re really pleased to keep our winning streak going and hope with a consistent team we can continue our run of form,” commented Maccabi joint-manager Max Kyte. “It was another clean sheet for the back four, Ezra has grown in strength, his hat-trick was deserved.”

Fairlop’s Jake Sanders acknowledged the better team had one.

“The referee threatened to call the game off in the first-half because of a kit clash, I wish he’d gone through with it,” he quipped.

Zach Cohen grabbed a consolation for Dons in one-sided clash.

“It was superb all-round performance from the boys, we didn’t let the Dons have a minute rest,” said Raiders joint-manager David Isaacs. “Each week we are getting better, everything that we are doing in training is paying off, however I believe we have another few gears to go, which is very exciting.

Dons manager, Jamie Nagioff, said: “Today was always going to be tough, playing a side that is by far the best in our division, but we still underperformed.

“Our injury list is proving a real issue at the moment, we had another two players pick up injuries and two more coming off today. But credit to Raiders, they were good on the ball.”

Vale came from behind to remain in the title hunt, however manager Jacob Emmanuel described the first half performance as “the worst 45 minutes” by his team in two seasons, especially after the euphoria of last week’s sensational cup win against mighty Hendon.

“A concoction of windy weather and overconfidence contributed but we were denied an absolute stonewall penalty after 15 minutes when James Millet was taken out,” commented Emmanuel.

Maccabi opened the scoring on the half-hour mark for a deserved lead. Vale changed formation and bossed the second half. After resolute defending, Vale duly levelled the scores with the first of a trio of assists from second half substitute Dan Reuben that turned the game.

Charlie Becker thumped home Vale’s equaliser in the 70th minute from a Reuben corner. Vale edged ahead soon after when Reuben played an inch-perfect ball into the box for Harry Graham to head home. Vale then grabbed sealed the points five minutes from time when Reuben forced an own goal.

“Based on our performance for 70 minutes we can consider ourselves a lucky, but a win is a win not matter how ugly,” said Emmanuel. “Reuben inspired us to victory when all looked lost. His second assist for Graham was a piece of magic. Becker followed up his performance against Hendon with another huge performance. He was outstanding. It was also great to have Ben Brown in goal after dislocating a thumb against earlier in the season.”

Gav Nussbaum earned a 2-2 draw for his team when he prodded home a Dan Cohen corner after Simon Zeffertt’s headed was cleared off the line in the 90th minute.

Cohen grabbed his team’s other goal in an entertaining clash at Capital City Academy.

Galaxy had led 2-0 with strikes from Tyler Smith and player-manager Luke Lewis.

“It was a sad one to take,” commented Lewis. ‘We dominated the game but let Rovers back into the game with a last-minute error. The second half we didn’t play anywhere near as well as we had done but you have to be gracious in defeat and victory, so fair play to Rovers, they showed great resilience to get back into the game, but we let ourselves down.”

Rovers boss Cohen noted, “We started slowly, Galaxy showed why they are a top team challenging for the title, but we never gave up and showed why we are good enough to be in this division.

“We deservedly got a point. We can be proud that we’ve taken points off most teams this season and are unbeaten in the league since September.”

The Division Two title race looks set to be exciting with FC Team and Borrusia Barnet both enjoying victories to remain joint top of the table. FC Team have a game in hand of their main rivals and comfortably defeated Club de Chigwell 3-0 on a quagmire of a pitch at London Academy.

Dave Cohen (2) and Adam Shafron were the goalscorers for FC Team, but the result could have been more comprehensive as Mitch Young’s team controversially had a Charlie Cohen goal chalked off and Dave Grossman missed a first half penalty. Chigwell also had a goal disallowed, again controversially by the referee in a hard-fought encounter.

Young however was thrilled with the victory, especially as his team was missing key players Craig Sandford and Jonny Haik.

“Lads who came in today performed brilliantly. We stuck to a game plan, nullified their main threats and should have scored more goals,” he said. “It was a battle out there but we came out on top in every department. Throughout the season there are games where you can play nice football and score lots of goals but today was about who wanted it more. We have taken six points off Chigwell which is massive and remain undefeated.”

“It wasn’t meant to be today, but we are only halfway through the season so there is a long way to go.” commented Chigwell co-manager James Rose.

Barnet ran riot at West Hamdillah thumping the bottom club, who still without a point, 9-1.

Hamdillah scored a consolation goal from the penalty spot late on.

“It was a very convincing win and a pleasure to watch from the sidelines,” said Paris boss Elio Elia.

“Shabtai scored a superb hat-trick and was a constant threat all game. The Ducks defence couldn’t handle him.”

North West London Bears threw away a 3-0 lead to eventually draw at Scrabble.

Matt Davidson, Sam Martin and Simon Lousky scored for the Bears, Alex Bourne (2) and Hadley Silver earning a point for the hosts.

The Bears opened a three-goal lead before Scrabble got back into the game just before half time.

Scrabble dominated possession on the resumption and deservedly equalised with Silver’s 25-yard strike from a free kick two minutes from time.

“The old boys continued their unbeaten run but it was a feeling of two points dropped,” said Scrabble player-manager Jon Yantin.

Bears joint-player-manager James Harpin commented, “It’s disappointing to throw away a three-goal lead but there are positives to take from our performance. Conceding just on half-time didn’t help as it changed the attitude of our play. We could’ve pushed for more goals but looked to maintain our lead.

“Scrabble used their experience and in the end we did well to restrict them to very few chances until they scored a scrappy goal that left us on the backfoot for the last 10 minutes. Then there is nothing you can do when someone sticks a free-kick into the top corner. I got a finger on it but the ball was in the top corner so I’m not complaining. To finish the first part of our season two games unbeaten shows signs of improvement so we will look to improve in the New Year.”

Scrabble player-manager Jon Yantin: “The old boys continue their unbeaten run into three games with the feeling it really was two points dropped.”