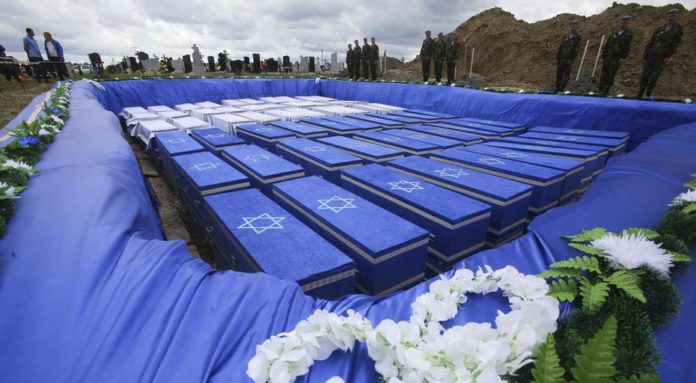 WJC President Ronald S. Lauder attended the burial ceremony. Speaking afterwards, he thanked the government and Brest municipality for cooperating with the Union of Belarussian Jewish Organisations and Communities in honouring the memory and lives of Jewish residents murdered in cold blood.

“We greatly appreciate their recognition of the tragedy that befell this community during the years of the Holocaust,” he said. “Sadly, this was just one of thousands of unmarked graves across Europe containing the remains of Jewish victims who were subjected to mass executions.

“Some of these sites are known to historians and eyewitnesses alike. It is imperative governments engage in due diligence to identify all these sites and ensure the bodies found are excavated and buried according to Jewish law.

“Each and every one of these victims deserves to be buried with full dignity and have their place of final rest symbolised with an appropriate memorial, such as a stone, plaque, or monument.”ZAKA volunteers from Tel Aviv travelled to the city of Brest to help facilitate the burial process where they discovered bones, clothing, shoes and personal belongings.

Volunteers described the experience as horrifying but worked tirelessly to complete the work.

“The sights unearthed by the delegation are heartbreaking to every Jew and pressure the authorities,” said ZAKA Director Yehuda Meshi Zahav in a statement. “

Singer called on the Brest burial to serve as a model for other locations in Belarus and elsewhere in Europe.

“We must ensure land is carefully examined before being designated for a building permit,” he said, adding they should use the same judgement before allowing construction on sites historically recognised as known places of murder.

“We must always honour the victims of Nazi brutality and protect the Jewish community that remains in these places,” he said.