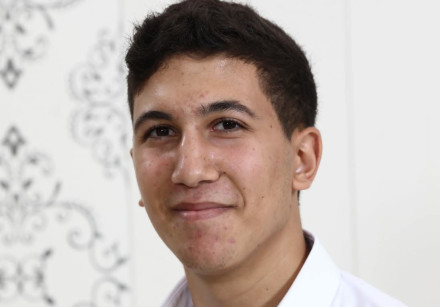 Guetta, 19, of Kiryat Moshe, Jerusalem, passed away at Beilinson Hospital in Petah Tikva from injuries sustained in a drive-by terror attack at Tapuach Junction in the West Bank last week.

Hundreds of mourners attended the funeral of the teenager, who is survived by his parents and six siblings, last Thursday. Jonathan Pollard was among speakers during the service.

Two other students travelling to study at Hesder Itamar Yeshivah, also 19, were also injured in the terror attack. Bania Peretz, of Beit She’an, remains in serious condition. His father, Zohar, has asked for Israelis to say Tehillim for his son.

Amichai Hala was released from the hospital after treatment for light injuries.

Muntasir Shalabi, 44, from West Bank town Turmus Aya was named as the main suspect and eventually tracked to a building in Silwad near Ramallah. He has been interrogated by Shin Bet.

“I commend the Shin Bet, the IDF and the police for their swift and determined action that led to the capture of the despicable terrorist who murdered (Yehuda) Guetta and wounded (Bania) Peretz,” he said. “Israel’s long arm reaches anyone who harms our citizens.”

Media reports have not linked Shalabi to a terror group but he reportedly backs Hamas and had called for terrorist attacks in the West Bank. Prior to his arrest his wife, Sanaa, and son, Ahmad, were arrested and questioned at the Shin Bet.

According to eyewitness, a suspected vehicle stopped near a bus station. At the time of the shooting, six people were at the scene. The terrorists fled toward Ramallah. Security forces immediately launched a manhunt.

Hala reportedly told media outlets about the attack, “We were talking to some guys at the bus station and suddenly I heard a loud noise and gun shots. We quickly lay down on the floor. I was with my back to the terrorists and only after I lay down did I realise they shot at us and fled towards Nablus.”

Hala added that it was a “miracle” he was only lightly hurt.

“Very quickly they started evacuating the wounded and then I saw that I was hurt by a bullet in the back,” he noted. “It was only when I was on the floor that I realised it was a terror attack. If I was standing a millimetre to the right or to the left, my situation would have been different.”

IDF forces entered Silwad near Ramallah to set up checkpoints.

President Reuven Rivlin extended condolences to Guetta’s family after his death was announced.

“I’m sending a courageous hug, strength, and prayers,” Rivlin said. “Oh, the pain and sorrow for the light that has been taken by a miscreant.”

Netanyahu noted, “These are difficult moments for the Guetta family and the entire nation of Israel shares in your sorrow.”

Following the attack, Netanyahu vowed to make a strong response. He said, “We will not allow terrorism to raise its head and we will strike our enemies with force.”

Defense Minister Benny Gantz confirmed the IDF was on high alert. “We will catch the terrorists and settle the score with them,” he said.

“The IDF is doing everything necessary to protect our citizens and ensure stability during a volatile and challenging period,” Chief of Staff Aviv Kochavi reportedly added.

Israeli security forces, the IDF and Shin Bet apprehended a number of suspects during the manhunt.

Shalabi returned to the Palestinian territories in 2020 having lived in the United States for a number of years according to media reports.

The IDF are unable to examine the burnt-out vehicle.

In the aftermath of the attack, violence increased as Israeli settlers reportedly carried out revenge attacks against Palestinians.