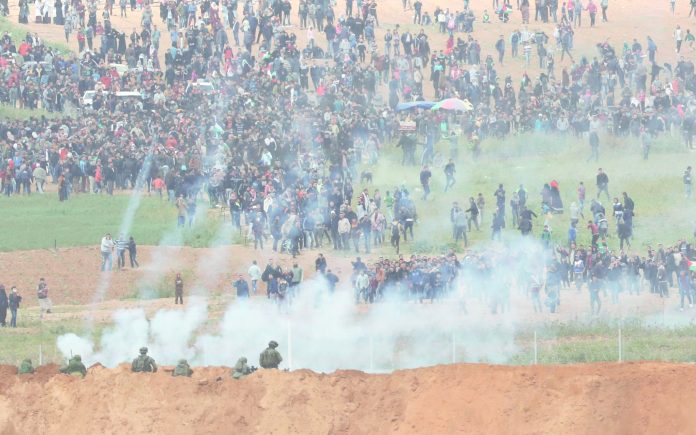 One died while a second was taken to hospital critically wounded.

The IDF detained a third for questioning but the fourth perpetrator escaped.

“Terrorists crossed the border fence into Israeli territory equipped with cutters and flammable materials and tried to set fire to a vacant sniper position,” IDF said in a statement.

“An IDF force identified the infiltration, monitored the incident then opened fire in pursuit of the terrorists.”

The spokesman added, “During the incident, the IDF force reported hearing gunfire in its direction. The force acted quickly against the violation of Israeli sovereignty and the attempt to sabotage security infrastructure.”

“The IDF views such incidents gravely and will continue operating against them in a decisive manner.”

Ongoing events in the region have seen a no-confidence vote in the Knesset held over the Gaza Strip strategy.

Minister Gila Gamliel noted that 450 incendiary kites had been intercepted by IDF drones, 260 Palestinians had crossed the border fence causing over 200 fires and 47,000 acres of land had been destroyed.

Away from Gaza, Israeli forces were positioned in the Syrian Golan Heights due to “developments” near the border with Israel on Sunday.

An IDF statement noted it will continue its “non-intervention policy” where Israeli sovereignty or civilians are threatened.

“Regarding southern Syria, we will continue to defend our borders,” he noted.

“We will extend humanitarian assistance to the extent of our abilities.

“We will not allow entry into our territory and we will demand that the 1974 Separation of Forces Agreement with the Syrian army be strictly upheld.”

He added: “I am in continual contact with the White House and Kremlin on this matter.

“The Defence Minister and Chief-of-Staff are in similar contact with counterparts.”

Netanyahu also noted the situation regarding sanctions being implemented against Iran.

“The Iranian economy is at a low point,” he reportedly said.

He added, “Our goal is what it always has been, to prevent Iran from achieving nuclear weapons and to break the cash machine that the agreement gave Iran, which finances its aggression in the region including Syria.

“At a time when the US is economically striking at the Iranian regime, we are working to prevent Iranian forces and those of its proxies from establishing a military presence anywhere in Syria, and we will continue to do so.”

Netanyahu’s comments came a few days after Israel moved humanitarian aid to refugee camps in Syria in an overnight operation.

“The IDF is monitoring what is going on in southern Syria and is prepared for a variety of scenarios, including continuing to provide humanitarian aid to fleeing Syrians,” a spokesman commented.