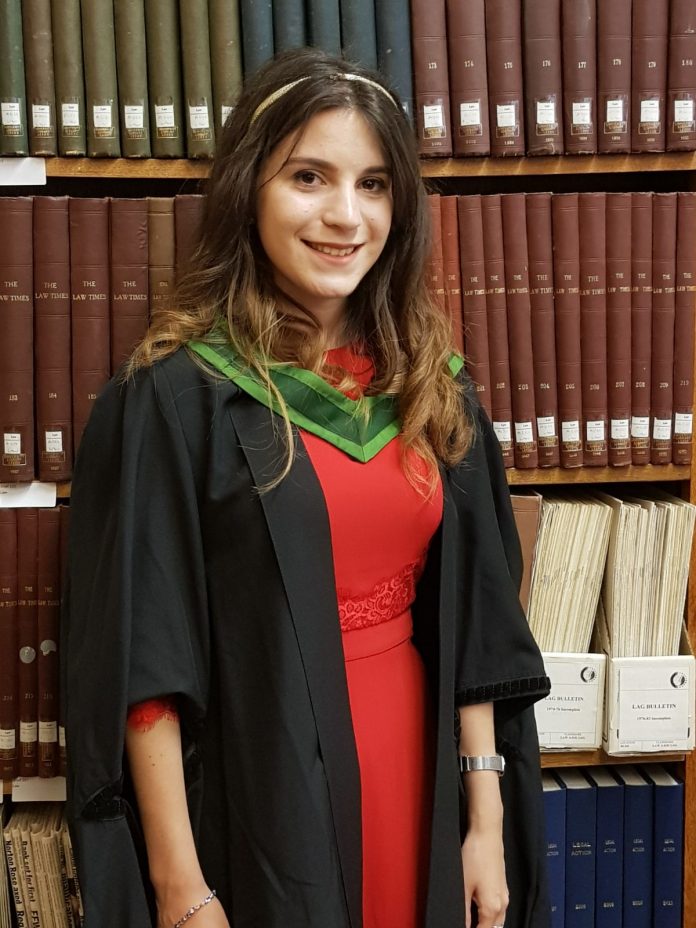 Inspirational young scientist Rebecca Lane, who as a child lived in sixteen homes in fourteen years and cared for two siblings with special needs, has completed an incredible turnaround by graduating from the University of Leeds with a 1st class Master of Science and Bachelor of Science honours degree in chemistry. She now intends to continue her mission to inspire young female scientists by completing a PhD at Imperial College, London from October 2017.
Rebecca’s parents struggled to care for her and her two siblings during her childhood – so much so that they were often homeless and were left without basic provisions. Rebecca would sometimes go for days on end without a proper meal and slept on mattresses for years.
Rebecca says Norwood has always been involved with her care “behind the scenes”, but she was first aware of the organisation around the age of nine when she took art therapy classes that the charity put on at her primary school. She says these were a way of “getting me to open up about my personal and home life”. Eventually she was abandoned by her parents at the age of 14 and Norwood stepped in through in-house social worker Alex Amzallag, who Rebecca credits with “saving me” in the most distressing of circumstances. Norwood was able to arrange for Rebecca to live with her aunt and uncle until the age of eighteen. She also had regular counselling sessions with Alex right up to the end of school.
Rebecca says of her sessions with Alex, “My counselling with Alex (post being abandoned) happened weekly while I was in school. The actual sessions consisted of an art-based activity. You wouldn’t really think a 14-18 year-old would want to paint, play with playdoh, decorate a box or make a dream catcher, but I loved it. I was having a chance to express myself and play in a way I was never able to as a young child. The art activities focussed around talking about what happened when I was younger and my feelings on being abandoned and all the complex feeling that comes with that.
“As I was abandoned mid-GCSE, my sessions with Alex also focused on helping me concentrate at school. My own personal life was very unstable as I came to terms with how poorly I was treated as a child as well as being abandoned by the people who were supposed to love me the most. The sessions with Alex helped me so much. Without his support which I really needed at such a crucial time, I wouldn’t have done as well nor stayed at school. She ensured that no matter how many obstacles I had been through and was continuing to go through, I would always try to meet my full potential.”
The relationship with Alex and Norwood has seen Rebecca turn her life around and, incredibly from the position she was in as a teenager, in 2013 she was able to go to the University of Leeds to study for an Integrated Masters Degree in chemistry. Norwood supported her by providing funds for university provisions, as well as putting her in touch with other charities who deal specifically with funding for further education.
Having now completed her course and achieving a 1st class MSc and BSc, she is looking to the future and hopes to inspire others who endure troubled childhoods to achieve their potential, as well as working hard to encourage more young women to study and take up careers in the sciences.
Rebecca said, “I’m delighted with my results and can’t wait to get to Imperial to start my PhD in October. I’m also looking to inspire more young women to get into science. There’s a real lack of role models and I’m hoping that just by studying and working in science as a young women I can inspire others. I also really want to help people to understand that just because you’ve had an unstable start in life, that doesn’t have to define you and you can still go on to succeed. The support I’ve had from Norwood has made all the difference to me. Knowing that there are donors who give money they’ve worked so hard for so that people like me can succeed has meant the world to me. Knowing that people have that faith in me has driven me to the success I am enjoying, and I want others to know that they can achieve their goals too with this amazing support network. Nothing can make up for not having a supportive family, but Norwood have come as close as anyone could.”
Norwood Chief Executive Elaine Kerr said, “Rebecca is a remarkable young woman and we are all delighted that she has excelled in her studies. She has given so much back to Norwood through speaking at several of our events and with her general advocacy for the charity. We will continue to keep in touch with her through her PhD and beyond, as relationships like the one we have built up throughout the years are what Norwood is all about. Seeing young people like Rebecca achieve their potential encapsulates so much of the work we do at Norwood. From our invaluable donors, through our dedicated staff and amazing volunteers, everyone will continue to work together to ensure there are many more success stories like Rebecca in the future.”