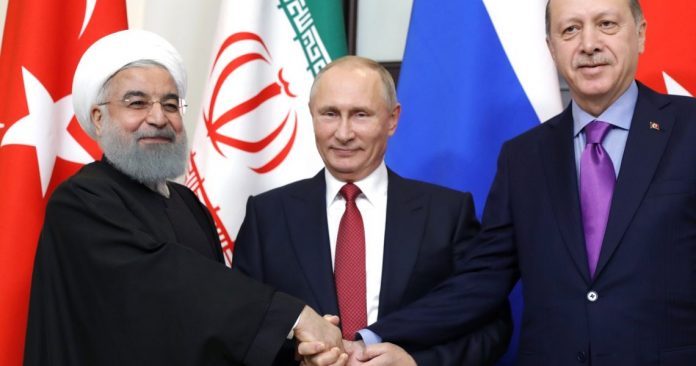 The leaders of Russia, Iran and Turkey ended a summit on Wednesday with a commitment to achieving a “lasting ceasefire” in Syria, as the future role of US forces in the country remains in doubt.

Following the meeting in Ankara, Turkish President Recep Tayyip Erdoğan and Presidents Vladimir Putin and Hassan Rouhani issued a joint statement which “rejected all attempts to create new realities on the ground under the pretext of combating terrorism,” whilst they “expressed their determination to stand against separatist agendas aimed at undermining the sovereignty and territorial integrity of Syria as well as the national security of neighbouring countries”.

At a joint news conference, the three leaders reiterated the need to drive “terrorists” out of Syria, to find a political solution to the seven-year-old conflict and to aid Syria’s beleaguered civilian population. Iranian President Rouhani took the opportunity to attack the US and Israel for their roles in Syria. “The Americans are against the Syrian government establishing its authority throughout the whole … there’s interference from Zionist forces in Syria which has increased problems,” he said.

Notably absent from the talks, which followed on from a trilateral summit in Sochi last November, were representatives from Syria itself and from the US.

US President Donald Trump surprised military leaders this week when he said the US would “be coming out of Syria … very soon”. It came just hours after Brett McGurk, the Special Presidential envoy for defeating ISIS, told the US Institute for Peace in Washington: “In terms of our campaign in Syria, we are in Syria to fight ISIS. That is our mission. And our mission isn’t over, and we’re going to complete that mission.”

Israel Prime Minister Benjamin Netanyahu spoke with Trump on Wednesday, in which they discussed “regional developments and Iran”. The White House said: “President Trump reiterated the commitment of the US to Israel’s security,” and added that “the two leaders agreed to continue their close coordination on countering Iran’s malign influence and destabilising activities”. However, Israeli media quoted US officials as saying the call was tense due to Trump’s plans ffor US forces to leave Syria.