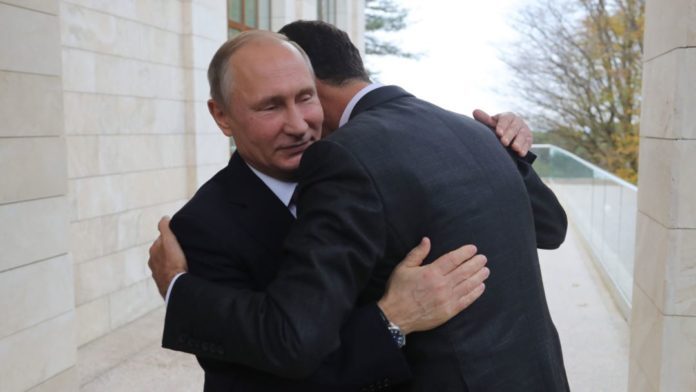 “The Israeli aggression on the airbase was carried out with F-15 planes that fired several missiles” the Syrian state news agency said.

Asked about the Russian statement, an Israeli military spokesman said he had no immediate comment.

The Syrian state broadcaster said early this week that explosions were heard at the T-4 airfield near Homs, which is close to the ancient city of Palmyra in central Syria. It added that there were several dead and wounded.

A Syrian military source was quoted as saying air defences shot down eight missiles fired at the base, where defence analysts say there are large deployments of Russian forces, and where jets fly regular sorties to strike rebel-held areas.

The Syrian Observatory for Human Rights, a British-based monitor, said at least 14 people were killed including some fighters of various nationalities, a reference to Iranian-backed Shi’ite militia members, mostly from Iraq, Lebanon and Iran fighting alongside the Syrian army.

Syrian media initially reported that it was a suspected US missile attack, but the United States denied it had launched any air strikes against the country. The reference to the US was later dropped.

“An aggression was perpetrated on T-4 air base in several strikes that is most likely to be an American attack,” state television said in a news flash.

The US Pentagon said it was not conducting air strikes in Syria “at this time,” formally denying the Syrian state television report.

“However, we continue to closely watch the situation and support the ongoing diplomatic efforts to hold those who use chemical weapons, in Syria and otherwise, accountable.” France also said it had not carried out the strikes.

Israel has struck Syrian army locations many times in the course of the conflict, hitting convoys and bases of Iranian-backed militias that fight alongside Syrian President Bashar Assad’s forces.

An intelligence source based in the region told Reuters he did not rule out an Israeli strike on the base.

Israel has previously said Syria had allowed Iran to set up a complex at the base to supply its ally, the Lebanese militant Shi’ite group Hezbollah, with weapons.

The Israeli military last February accused Iranian-backed militias of operating at the base, from where it said an Iranian drone, that was shot down over northern Israel, had been launched.

Israel has long said Iran was expanding its influence in a belt of territory that stretches from the Iraqi border to the Lebanese border, where Israel says Iran supplies Hezbollah with arms.

Hezbollah and other Iranian-backed militias have a large military presence in Syria and are well entrenched in central and eastern areas near the Iraqi border.

US President Donald Trump said earlier on Sunday there would be a “big price to pay” after medical aid groups reported dozens of civilians, including many children and women, were killed by poison gas in a besieged rebel-held town.

The United States launched a cruise missile strike on a Syrian air base a year ago in response to the killing of dozens of civilians in a sarin gas attack in an opposition-held town in northwest Syria. The gas attack was blamed on Assad.

The US missile strike was against a Syrian air base which Washington said was used to launch the strike.

French President Emmanuel Macron spoke to Trump by telephone and the two agreed that they would work together to establish clear responsibility for what Macron’s office said they had agreed was a confirmed chemical attack.

Macron said in February “France will strike” in the event of lethal chemical weapon attack on civilians by government forces in Syria.

This was after further accusations on Monday from Russia’s Ministry of Defence. They said Israel is responsible for the attack on an Iranian Revolutionary Guard Corp (IRGC) command centre in Syria early Monday morning.

Dmitry Peskov, spokesman for Russian President Vladimir Putin, told reporters that Russian military advisors could easily have been at the base, while Russian Foreign Minister Sergey Lavrov called the incident “a very dangerous development”.

Iran’s foreign ministry strongly condemned “the aggression and the air strike by the Zionist regime”.

NBC News quoted two US officials saying that Israel had carried out the strike, adding that Washington had been informed in advance of the attack by their Israeli counterparts.
Israeli newspaper Yediot Ahronot reported that the target was a shipment of highly advanced weapons thought to be on their way to Hezbollah. Ofer Zalzberg from the International Crisis Group said: “The more we see of this, it seems like it’s a strike against Iranian capacities to operate drones from Syria potentially against Israel.”

According to the Syrian Observatory for Human Rights, 14 people were killed in the strike, including Syrian and Iranian personnel. Iran’s Fars news agency reported that this included four “Iranian military advisers”.