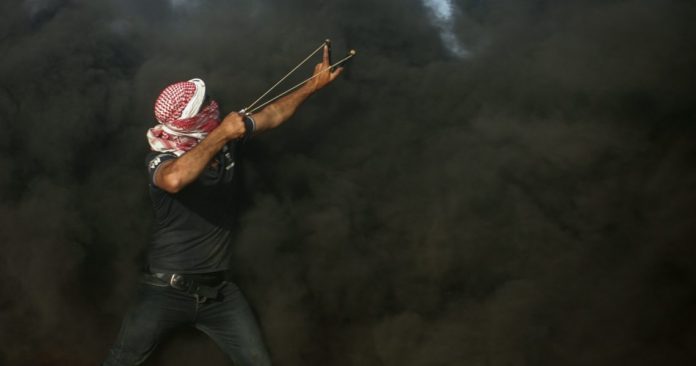 Israel’s military remains on high alert ahead of Friday protests along the Gaza border.

Tomorrow’s demonstration is expected to see Gazans set fire to thousands of tires along the border. The protesters aim that burning tires will create a smoke screen that can allow further sabotage to the fence without the IDF being able to detect them.

According to the Israel Defence Forces (IDF), Israeli aircraft targeted an armed Palestinian adjacent to the security fence in the northern Gaza strip during an overnight operation. “The IDF will not allow any harm to the security of Israeli civilians and will continue to operate against terrorists who are involved in acts of terror,” the army said in a statement.

Yesterday the head of the Arab League, Ahmed Aboul-Gheit, called on the International Criminal Court to investigate the deaths of 18 Palestinians killed in Gaza since Friday’s first mass demonstration. He also said he supports a call by UN Secretary-General Antonio Guterres for an independent investigation.

B’Tselem, the Israeli human rights organisation, called on IDF soldiers to disobey orders and refuse to use their weapons against unarmed protesters during the demonstrations planned for Friday.

“As long as soldiers in the field continue to receive orders to use live fire against unarmed civilians, they are duty-bound to refuse to comply. The provisions limit its use to instances involving tangible and immediate mortal danger, and only in the absence of any other alternative,” the group said.

The IDF maintains that it only targeted “instigators” who burned tires or threw stones and firebombs toward the border fence.

When asked about B’Tselem’s campaign during an interview, Defence Minister Avigdor Lieberman said: “I have a practical suggestion: B’Tselem’s director is welcomed to convince thousands of Gazans this Friday to stop placing explosive charges near roads, fire at soldiers and violate our sovereignty, and to just safely walk home.”

Egypt’s Minister of Intelligence secretly visited Israel this week to discuss the tension on the Gaza border. He passed on a message to Hamas leaders, via Shin Bet Director Nadav Argaman, that Israel would not display tolerance toward Hamas in the coming days and weeks.