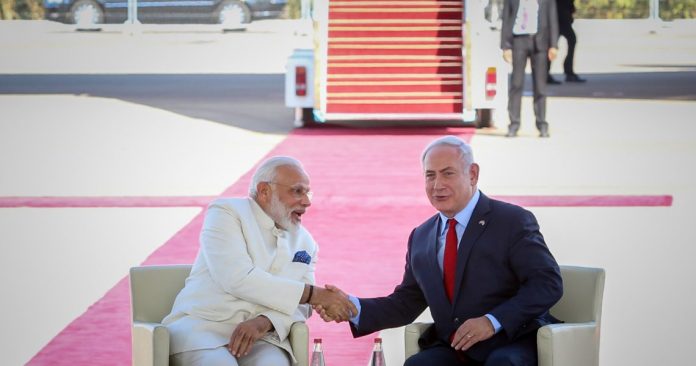 Israeli Prime Minister Benjamin Netanyahu held a formal meeting with his Indian counterpart earlier last week as the two countries signed nine deals to boost bilateral relations.
Netanyahu and Indian Prime Minister Narendra Modi hailed the “dawn of a new era” in their relations after signing agreements in defence, agriculture and aviation.
In natural gas and oil, they agreed to strengthen cooperation in exploration, production and research and development. They will advance academic ties and start-ups. The two countries also signed cooperation deals in cyber-defence, security and science.
Netanyahu said after meeting Modi in Delhi that “India and Israel are living proof not only that democracy works but they demonstrate something deeper – the intrinsic value of freedom which I believe is the intrinsic value of life. India stands out in the community of nations because over 2,000 years the Jews of India have never experienced anti-Semitism as our people experienced in so many other lands. This is a tribute to your civilisation, to your tolerance, to your humanity”.
In response, Modi said: “I have a reputation for being impatient to get results and so do you, PM Netanyahu. We will strengthen our cooperation in areas that affect the lives of our people — agriculture, science technology and defence.”
Netanyahu said the two nations had great potential to work together to improve the lives of their citizens, mentioning specifically an “idea of revolutionising Indian agriculture as we’re revolutionising Israeli agriculture – precision agriculture that goes down to the individual plant,” whilst Modi held out an invitation for “more and more Israeli people, businesses and companies to come and work in India”.
Prime Minister Netanyahu also mentioned the 2008 Mumbai terrorist attacks. “Indians and Israelis remember too well the savagery of the horrific terrorist attacks. We fight back, we never give in,” he said.
Indian National Security Adviser Ajit Doval met his Israeli counterpart Meir Ben-Shabbat, where they discussed security, counter-terrorism and defence cooperation. A joint statement after the talks said they agreed “strong measures against terrorists, terror organisations, those who sponsor, encourage or finance terrorism or provide sanctuary to terrorists and terror groups”.