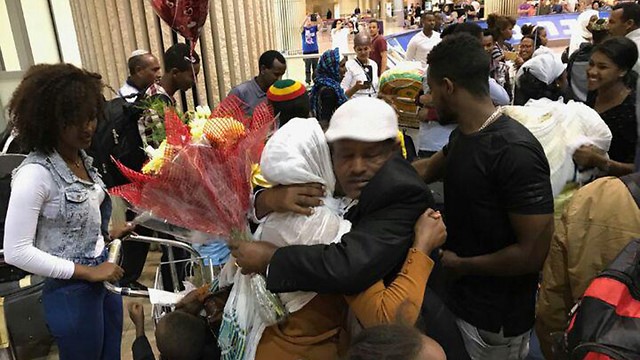 Some 70 Ethiopian immigrants arrived in Israel last week as part of a joint operation between the Jewish Agency and the International Christian Embassy in Jerusalem. Their arrival was made possible due to a government decision passed in November 2015, which agreed to bring over 9,000 members of the Falash Mura community from Ethiopia, but activists criticised the slow pace at which the decision has been implemented.
Dozens of excited family members gathered at Ben-Gurion Airport to meet their relatives, whom they had not seen for more than 25
years.
Among them was Malaso Bardokai, who waited quietly to greet his daughter. “We have been waiting for this for so long, and now the family is ﬁnally reuniting,” he said.
Eliyahu Tadale was waiting for his nephews, whom he has not seen since Operation Solomon. “It’s been 25 years. My brother has not seen his children all these years and only after we fought for it were his children allowed to make aliyah to Israel,” he said.
After a three-year halt in the process, the Aliyah project from
Ethiopia was renewed in October 2016 as an implementation of the government decision from November 2015 to bring over the Falash Mura community within ﬁve years.
The plan’s renewal was made possible after months of government foot-dragging because Likud Members of Knesset, Dudi Amsalem and Avraham Neguise, exerted pressure in the correct circles.
The 70 immigrants who landed last week are only the second group to arrive in Israel since the government decision was announced last August. The plan is to bring over 1,300 of the 9,000 who are waiting in transit camps in the Ethiopian cities of Gondar and Addis Ababa.
“We are happy to be partners in family uniﬁcation and to help bring people who have been waiting for many years to come to Israel,” said
the very pro-Israel International Christian Embassy president, Dr. Jürgen Bühler. He went on to say that “Some of the families have been separated for over two decades, and we have the honour to bring them to Israel.”