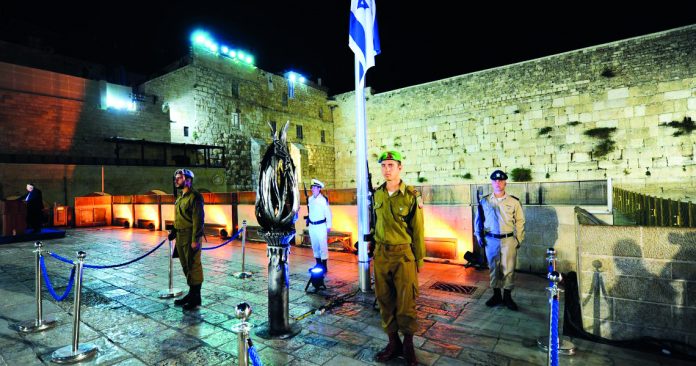 Israel’s memorial day, Yom Hazikaron, began earlier this week with a siren sounding across the country and a minute silence to remember fallen soldiers and victims of terrorist attacks.
This year 23,646 fallen soldiers and 3,134 victims of terrorism were remembered. The names of 71 soldiers and 12 victims of terrorism who have died this year were added to the list of those commemorated.
Speaking at the annual ceremony at the Western Wall, Israeli President Reuven Rivlin said: “We need to make sure that we send our sons and daughters off to battle only after having done everything possible and only when there is no other choice.”
Chief of Staff Lt-Gen. Gadi Eizenkot said: “Seven decades have passed since the sound of the siren overwhelmed the streets of our young country and silence befell the land; and now, we pause once again. We take leave from our daily routine, and stand at attention on our country’s roadsides. We stand together in the shadow of personal memories and national loss – across cemeteries, memorial monuments and IDF bases, remembering the lives reflecting through the darkness of memory.”
Following the ceremony, Rivlin and Eizenkot joined Israeli Prime Minister Benjamin Netanyahu, Defence Minister Avigdor Lieberman, Police Commissioner Roni Alsheich, Mossad Director Yossi Cohen, Knesset Speaker Yuli Edelstein and Chief Justice Esther Hayut at the Chagall State Hall in the Knesset, along with hundreds of bereaved families.
Among the many ceremonies and services held across Israel was a joint Israeli and Palestinian memorial ceremony in Tel Aviv, which was attended by 8,000 people. Ninety Palestinians from the West Bank attended the service after the High Court decided they should be granted entry permits to attend, despite opposition from Defence Minister Lieberman.
The official state ceremony honouring Israel’s fallen soldiers began at the same time at the National Memorial Hall on Mount Herzl and hundreds of memorial ceremonies took place simultaneously in military cemeteries across the country. More than 1.5m people are expected to visit cemeteries and attend memorial services.
The official state ceremony honouring victims of terrorism will be held on Mount Herzl at 13:00, following a ceremony honouring Israel police officers killed in the line of duty which takes place at 11:30, also at Mount Herzl.