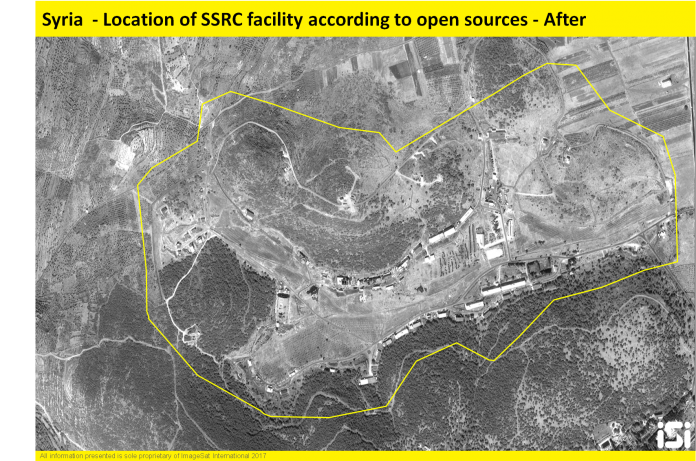 New pictures from an Israeli satellite imaging company released pictures this week that show the impact of a strategic airstrike attributed to Israel on a Syrian regime site last week.
The Syrian military’s Scientific Studies and Research Centre (CERS) facility near Masyaf, in the north-western Hama province, was hit from the air, damaging several buildings and killing two Syrian soldiers.
Western officials have long associated the CERS facility with the production of precision missiles and chemical weapons.
In a statement, Syrian leader Bashar Assad’s military said, “Israeli warplanes fired several rockets from the Lebanese airspace at 02:42 a.m. on Thursday targeting one of the Syrian military posts near Massyaf, killing two army personnel and causing material damage to the site.”
Satellite images, provided by ImageSat International, show the extent of the damage to the site. While the buildings that were hit in the strike still appear to be standing, their roofs are mostly or entirely destroyed and debris can be seen scattered around them.
Over the past five years, Israel has carried out dozens of airstrikes within Syria, though it rarely acknowledges specific attacks. Israel says it maintains a hands-off policy toward the Syrian civil war, only getting involved when one of its “red lines” is transgressed.
These “red lines” include the violation of Israeli sovereignty through deliberate or accidental attacks, Iranian-supported militias taking positions on the Golan border, and attempts to transfer advanced weapons to the Hezbollah terrorist group.
Though Israel has not confirmed its involvement in last week’s airstrike, analysts believe the attack on the Syrian military facility was carried out in order to prevent precision-guided missiles from reaching Hezbollah’s hands.
Syrian opposition forces have in recent months claimed the Masyaf site, and other CERS facilities, have been working on joint projects with Iranian specialists to develop chemical weapons capability for missiles.
In April, the Trump administration placed sanctions on hundreds of CERS employees following a chemical attack on the Syrian rebel-held city of Khan Sheikhoun that killed dozens of civilians, including children. A recent report by a UN war crimes commission said it had clear evidence that the Syrian regime was behind the attack and that it had used sarin nerve gas.
In 2005, then US president George W. Bush placed sanction on CERS, alleging it was producing weapons of mass destruction.
Five years later, in September 2010, the director of the Israeli National Security Council’s Counter-Terrorism Bureau said that CERS facilities would be destroyed if the agency continued to provide weapons to terror groups.