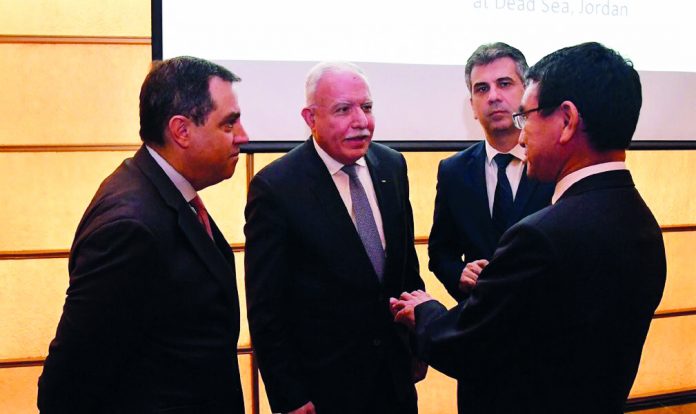 The Japanese Foreign Minister chaired a Palestinian, Jordanian and Israeli meeting to promote the Peace Corridor project and the joint Agro-Industrial park to enhance cross-border trade and cooperation.
The meeting between Japanese Foreign Affairs Minister Taro Kono, Israel’s Economy Minister Eli Cohen, Jordan’s Minister for Regional Cooperation Imad Fakhuri and Palestinian Foreign Minister Riyad al-Maliki earlier this week was the first ministerial meeting to include Israel and Jordan since the shooting of two Jordanians at the Israeli embassy in Jordan July 2017.
In the meeting the ministers discussed a Japanese initiative to increase the joint industrial zone, exporting Palestinian produce from local factories from nine factories to 32, employing about 5,000 people. The goal of the Agro-Industrial-Park project is to create an economic infrastructure for peace in the region. The Japanese Government have funded the joint economic project since its inception in 2012.
Israeli Economy Minister Eli Cohen said promoting the industrial park was an interest shared by both sides. “Our policy is to provide relief measures whenever possible and to make our best efforts to provide those who are not involved in terrorism with normal lives,” he said.
The meeting was held ahead of Japanese Prime Minister Shinzo Abe’s visit to Israel today with a delegation of senior Japanese business leaders.
He began his visit to the region in Ramallah where he reasserted his country’s support for the creation of an independent Palestinian state within the framework of the two-state solution, according to Wafa news agency. The Japanese Prime Minister will also meet Israel Prime Minister Benjamin Netanyahu he will also visit the United Arab Emirates and Jordan.