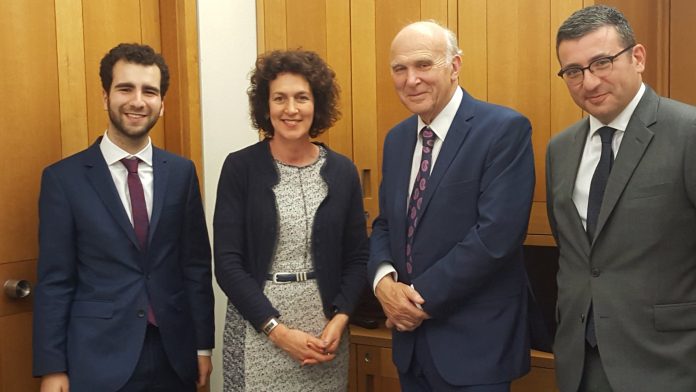 In a wide-ranging meeting with the Leader of the LibDems, Sir Vince Cable, Jewish community representatives led by Board of Deputies Chief Executive Gillian Merron discussed issues including antisemitism, Israel and Brexit.
Gillian acknowledged the actions of the party in expelling Baroness Tonge and preventing David Ward from standing in the election. Sir Vince said that he was committed to continuing to build relationships with the Jewish community and he would act immediately should any further problems arise.
CST Director of Communications Mark Gardner briefed Sir Vince on antisemitism in the UK and abroad.
Gillian said: “Having been briefed on the main areas of Jewish concern, it was welcome to hear of the interest and support from Sir Vince. We look forward to continuing our ongoing relationship.”
Sir Vince said: “I was pleased to discuss these serious issues affecting the Jewish community and I will ensure that the Liberal Democrats remain strong friends of the community in Parliament and beyond.”