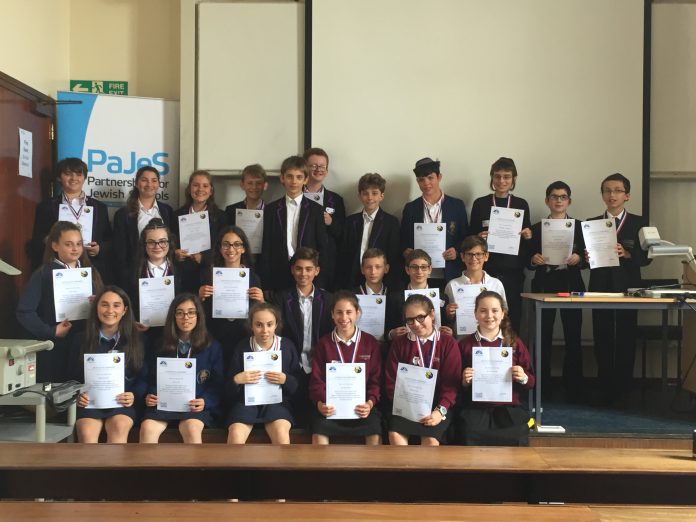 Last week the first ever National Hebrew Spelling Bee Finals took place for primary schools and Year 7 students. The Modern Hebrew Spelling Bee project is a joint initiative between Routes into Languages East, led by Sarah Schechter, and Partnerships for Jewish Schools (PaJeS) to encourage students to consolidate their Modern Hebrew by practising and improving their vocabulary, spelling, pronunciation and memory skills.
The primary school National Modern Hebrew Spelling Bee final was held in PaJeS with 15 finalists from Years 5 and 6 competing from three schools, Naima JPS, Broughton Jewish Manchester and King David Primary Manchester. Finalists had to learn 40 prepared words which were chosen at random. The finalists had one minute to translate the words from English into Hebrew, and then pronounce and spell it in Hebrew.
The four winners all came from Broughton Jewish Primary in Manchester, with Shlomi Nagar, Elisha Scheftz and Josh Sacks being awarded with a shield for running up and the overall winner was Miriam Shields.
The Year 7 Finals took place in Cambridge on the Monday 3rd July with JFS, Hasmonean and JCoSS sending finalists and competing alongside the National French, Spanish and German Translation Bee Finalists. There were two competing categories for the Modern Hebrew Spelling Bee, beginners and continuers. The beginners, children who only started learning Modern Hebrew in year 7, had 65 words to learn. Continuers who had previously learnt Modern Hebrew at primary school had 100 words to learn. Overall winner of the beginner’s category was Atara Sharmon from Hasmonean High School, with Oliver Shooter from JFS, Daniella Spoto, JFS, and Yael Rosenfield from Hasmonean High School coming in 2nd, 3rd and 4th place respectively.
All four winners of the continuer’s category in the National Modern Hebrew Spelling Bee came from Hasmonean High School. Avi Landau won overall and Nochi Zajac, Chananya Goldmeier and Daniela Jay came 2nd, 3rd and 4th place respectively.
Samantha Benson Co-Director of Education for PaJeS said: “For many years Sarah Schechter from Routes into Languages has dreamt of including Modern Hebrew in the Spelling Bee and other Routes projects.
It is thanks to the vision, commitment and hard work of our pioneering pilot schools and of course the teachers, children and parents, that PaJeS has now worked in partnership with Routes into Languages to make this a reality. The first ever Routes into Languages Modern Hebrew Primary and Year 7 Spelling Bee Competitions have been a huge success. The atmosphere and buzz at both the London and Cambridge National Finals was wonderful. The children performed very impressively and confidently, and many of them were truly amazing. Some of the adults had a go and it is extremely challenging!
In Cambridge it was particularly exciting to see Hebrew featuring with French, German and Spanish in the final, watched by students and teachers from secondary schools around the country, and representatives from University of Cambridge and the European Commission.
We hope that next year more schools will take part in the Spelling Bees, and that sponsorship will enable us to pilot a Year 8 Modern Hebrew Translation Bee and to launch other initiatives in partnership with Routes into Languages.”
Yael Zegze, Hebrew Teacher at King David Primary Manchester said: “The Spelling Bee is a great opportunity for our students. It inspired other children to see language as something special. It showed the children they can learn so many new words in a short period of time. We are so proud of all of our students for working so hard to learn to spell so many words in such a pressurised time limit.”
Sarah Schechter, Project Manager of Routes into Languages East said: “They were all absolutely amazing! For me, personally to see the project working so well in Ivrit was particularly exciting. Thank you to Samantha Benson at PaJeS for having the vision to commit to the Modern Hebrew Spelling Bee, it’s been such a pleasure working with her and Dalia Wittenberg. There are so many projects we could be running together, working with the teachers in the Jewish schools and cheders to motivate pupils and help them to improve their Modern Hebrew.”