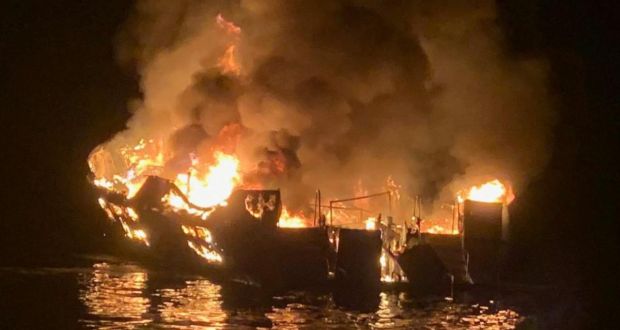 A 40-year Jewish woman is among 25 victims of a horror boat fire off the Southern California coast earlier this week.

Search crews were looking for nine missing people 24 hours after the tragedy.

Leah from New Jersey was named among the deceased.

A local Chabad shaliach is working with the FD, Sheriff and Coroner’s office to ensure burial details.

Passengers on the scuba diving trip were asleep aboard the dive-boat Conception anchored off Santa Cruz Island, 145 km west of Los Angeles when the incident occurred in the early hours.

An official number will be confirmed after autopsies.

Five crew members sleeping on the top deck reached safety in a dinghy.

Missing and dead were among 39 passengers and crew who departed Santa Barbara Harbour for a Labour Day weekend trip.

Authorities acted after an SOS call.

“The call was garbled, it was not that clear, but we were able to get some information out of it to send vessels,” said Coast Guard Petty Officer Mark Barney.

The Conception was owned by Santa Barbara-based Truth Aquatics, founded in 1974.

Coast Guard records illustrate safety breaches were addressed by the boat’s owners over the past five years.

Some contraventions were fire safety including the replacement of a heat detector in 2014.

The Conception has run similar expeditions since the 1970s.

A family assistance center is available for relatives.

A memorial has also been set up outside Truth Aquatics in Santa Barbara Harbour.