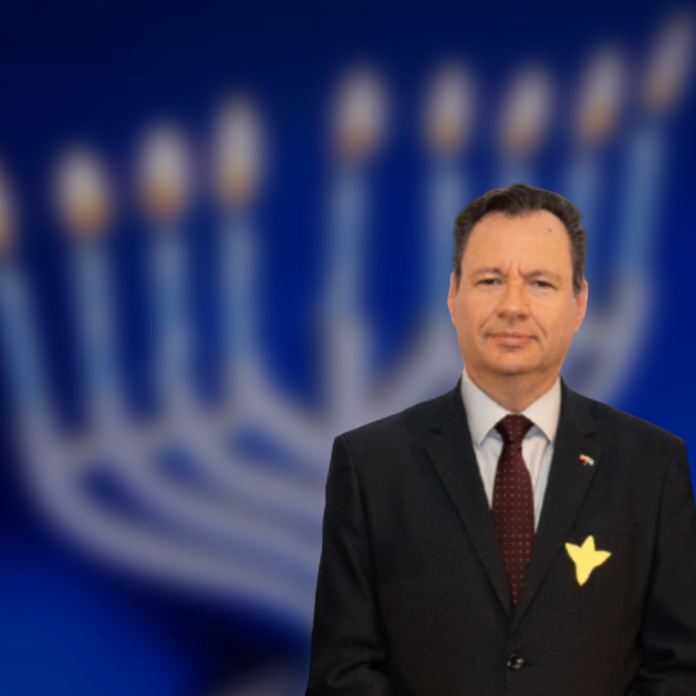 After two years, March of the Living UK – an annual trip giving young people from the UK access to experiential Holocaust education in Poland – has returned, taking 200 young Jewish people to retrace the steps of history.

The theme of this year’s trip, “passing the torch”, was brought to life on Sunday night with a special inauguration of Jozef Wegrzynowski as a ‘Righteous Amongst the Nations’ in Warsaw.

Wegrzynowski, together with Witold Trzeciakowski, saved the life of Max Ostro, the father of UK-based philanthropist Maurice Ostro. The award, designated by Yad Vashem in Jerusalem, is reserved for non-Jews whose actions in the Holocaust directly saved the lives of Jewish families from the Nazis, often at great personal risk.

During Sunday’s ceremony, the children, grandchildren and great grandchildren of the Ostro, Wegrzynowski and Trzeciakowski families came together, intertwining tales passed on from the generations before them to tell a captivating story marked by faith and courage.

Cassie Ozer, CEO of March of the Living UK, opened the ceremony saying, “It’s an honour to host this important event. The stories of the non-Jews who saved Jewish lives, often at the most ultimate cost, must be widely shared. We hold these people in the highest esteem and those families who were saved have the greatest debt. We owe it to all the Righteous Amongst the Nations to ensure that their stories are shared and that we inspire future generations by their colossal acts of bravery and moral responsibility.”

Ambassador Livne said, “What we have heard here today is extraordinary and extremely moving. These people risked everything – their own lives and something they cherished even more, the lives of their families. We need to learn the history of the Holocaust and understand how it happened, not only to pay respect to the families who perished, but also to never ever allow anything like this to happen again.”

Chief Rabbi of Poland, Rabbi Shudrich, said: “Right now we are experiencing a very challenging time in the world, with what is happening in Ukraine. Our Jewish obligation is to learn a lesson from the Righteous Amongst the Nations – to help every Ukrainian who is running for their life, to help every human we can to escape from the horrors of this war.”

Witold’s grandson has done just this, recently opening his home in Poland to a Ukrainian family from Kharkiv, and following in the footsteps of his grandfather.“It was obvious that we would invite a Ukrainian family into our home”, he said. “The stories we grew up hearing are so similar to the news we are hearing from Ukraine. We live by the belief that you cannot be indifferent if someone is suffering.”