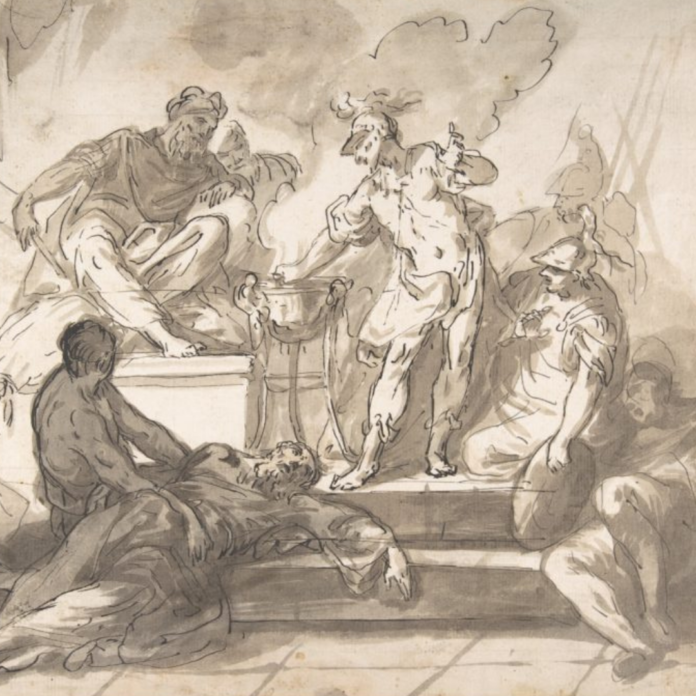 On a wintry October day in 1941 The Jews of the Kovno ghetto were assembled at an Umshlagplatz (gathering place), about to be deported to their eventual death. As word spread about their inevitable fate, the following question was posed: what beracha should be recited when performing the mitzvah of “kiddush Hashem”? Surrendering your life on behalf of Hashem, is a surpassing mitzvah, but one which is performed once-in-a-lifetime, if at all. Moreover, those who perform the mitzvah are no longer alive to transmit its traditions. Many halachikally-conversant people would not know the answer to this question.

Ultimately, the question was answered and the instructions for the beracha were quickly disseminated. This tragic, but heroic story, highlights how obstruse this mitzvah is, and how sparse our “information” is about a mitzvah so central to Jewish identity and to Jewish history.

By “eavesdropping” on three martyrs, we can better appreciate the features of this fearsome mitzvah.

These three refugees from the ruins of Jerusalem didn’t actually surrender their lives, as they were miraculously rescued from incineration. They lived at a delicate seam of history. The Jewish world was in shambles, as the mikdash had been ransacked and burned, and we had been driven from Israel into faraway lands. Nevuchadnezar, the Babylonian tyrant, had built an indomitable international empire and was roundly deified as a god. An all-powerful leader, he constructed a towering idol, demanding that every country send a delegate to bow to his god; those who refused would be flung into a blazing fire.

To the average bystander, it appeared as if Hashem had receded from His world. Perhaps He had discarded His once-chosen people due to their repeated betrayals. Was Hashem still supervising His world, and was the Covenant with the Jews still intact? Perhaps Hashem had been defeated by humans? These questions, which in hindsight seem silly, were very much on people’s minds in Babylon of 580 BCE.

No one dared defy Nevuchadnezar’s supreme authority- except for three Jews who saw through his facade and weren’t intimidated by his hubris. These three immigrants from Yerushalayim made a stand. The Talmud reports their “final” prayers (or so they thought): as they were tossed into the furnace, they asked to be spared so that the world at large would realize that Hashem hadn’t abandoned His world, nor had He betrayed His people. They recited the verses (which we recite during hallel) “lo lanu Hashem…ki im l’shimcha ten kavod”- do not save us for our own sake but for the honor of Your Name.

These three heroes weren’t interested in any future reward, nor were they thinking about the world they were about to transition to. We inhabit this world to represent the presence of Hashem with every breath we take and, if necessary, with our last breath. Their quiet defiance turned the tide of history. It soon became clear that Hashem would not abandon us. Shortly thereafter, Nevuchadnezar went mad, roaming the forests like an animal. Around seventy years later our mikdash had been rebuilt and the land of Israel was, once again restored to Jewish settlement. Martyrdom shapes history.

About 600 years later, Rebbi Akiva defied Roman bans on public teaching of Torah and, for his “crimes” was sentenced to a brutal execution. His students, who attended his execution, inquired of his reflections. His response was surprising and rhetorical: “my entire life I have agonized and pondered whether I would have opportunity to fulfill this mitzvah of Jewish martyrdom; now that the awaited-for moment is upon me is there even a question that I will proceed?”

Rebbi Akiva reminded his students that Jewish martyrdom isn’t an ‘aberration’ of Jewish history; if we stand for Hashem in this world we will be disliked. We serve as the moral and religious conscience of humanity, and no one likes a “whistle blower”. There will be quieter periods of historical respite, but there will also be more violent periods, as the perennial battle for the presence of G-d in this world courses throughout the generations. The Romans were incensed that we rejected their carnival of mythological gods, and they vented their anger at our greatest leader. Sensing the realities of history, Rebbi Akiva “expected” this outcome. It didn’t take him by surprise.

As Jews, we do not have a death-wish, but covet life and the opportunity to model of godlike lifestyle. However, commitment to Jewish history and to Jewish mission comes with an awareness that we may be summoned to martyrdom, just as Rabbi Akiva was.

Ultimately, Rebbi Akiva institutionalized martyrdom for millions of Jews who would follow in his wake. He recited Shema and, since his execution, Jews across history have fiercely defended Hashem in a violent and disbelieving world with the words of Shema leaving their lips as they vaulted to a different place. Rebbi Akiva was first but certainly not last.

Rabbi Elchonon Wasserman- a student of the Chofetz Chaim- had been visiting the USA during WWII. Courageously, he returned from this safe haven to Nazi-controlled Europe, so that his students would not be abandoned. During the summer of 1941, he and twelve other torah scholars were arrested and shot to death. Recognizing his imminent capture and execution he spoke to those assembled: “we have been chosen by Hashem as sacrifices on behalf of the Jewish nation. We must ensure that our thoughts are pure and our sacrifice successful. The fire which will consume our bodies will ultimately resuscitate the Jewish people”.

In his comments, Rabbi Wasserman highlighted the “continuity” of Jewish history; this fearsome mitzvah may take the life of an individual Jew, but it fuels the larger Jewish historical trajectory. Sometimes the historical impact of martyrdom is easily discernible. By resisting Nevuchadnezar, the three refugees directly eroded his authority, leading to his eventual dethroning.

Rabbi Wasserman’s execution didn’t dent the Nazi war machine. However, we live intergenerationally and acts of heroism send metaphysical ripple effects throughout Jewish history. Little could Rav Elchonon have known that, a few short years after his act of martyrdom, the Jewish nation would be revitalized in its ancient homeland!! In hindsight, his comments, moments before he ascended to Heaven, were prophetic.

On Yom Ha’shoah we remember the victims of the Holocaust who died while representing Hashem in this world. We pray that we are on the verge of an era in in which the entire world will freely acknowledge Hashem, and that our battle to defeat evil and ignorance will conclude.