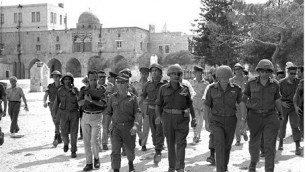 The walls of the Old City of Jerusalem were bathed in the blue and white of the Israeli flag from last Saturday night as Israel entered a week of celebrations marking the 50th anniversary of the reunification of the city.

Tuesday evening marked the beginning of Jerusalem Day, which commemorates that capture of East Jerusalem in the 1967 Six Day War, reuniting the city and bringing the Temple Mount and Western Wall back under Jewish control.

Events have included sound and light shows being projected onto the walls of the Old City, bands and street entertainment, Israeli flags everywhere and iconic images in all places from the war.

The city was also decked with American flags as the country hosted US President Donald Trump and the First Lady earlier in the week in what became an extremely busy week even for Jerusalem standards.

There was hope that Trump might announce the moving of the US embassy from Tel Aviv to Jerusalem, or recognise Jerusalem as Israel’s capital, during the visit, but recent indications pointed to the fact that it was not going to happen, at least not until an effort was made to get talks between Israel and the Palestinians back on track.

The Six Day War is a 50-year-old story that is known throughout the world. But the national archives’ recent release of transcripts from 1967 cabinet meetings reveals some unknown intense discussions and petty squabbles before, during and after the war.

In May 1967, Egypt blocked the Straits of Tiran, which was one of the many sparks that caused Israel to carry out pre-emptive strikes against Jordan, Egypt and Syria. Israel’s leaders feared the country would be overrun by five Arab armies – Egyptian, Syrian, Jordanian, Iraqi and Lebanese – and that it would be far better to fight them on Israel’s own territory rather than on Arab land.

One week later, the Jewish state conquered Jerusalem and the West Bank, the Sinai Peninsula, Gaza and Golan Heights, and with that, about one million Arab residents fell under Israeli control. The eternal capital of the Jewish people was returned to Israeli and Jewish hands.

Twelve years later, the Sinai was returned to Egypt as part of a lasting peace agreement. But the Golan Heights and Jerusalem was annexed by Israel, though this has never been recognised internationally.

Last Thursday, Israel’s state archives offered a glimpse into the government’s decision-making process in the lead-up to and aftermath of the war, which is widely regarded as the primary turning point in modern Israeli history.

The archives made hours of video, dozens of photographs and some 15,000 pages of documents available for download and study, including most notably the transcripts of the cabinet meetings.

Most, if not all, of these documents were available in the past, and the archives made many of the cabinet transcripts available to the larger public in 2012. However, the security cabinet transcripts were published only last Thursday and have never before been released, according to Israel’s national archivist Yaacov Lozowick.

Now the minor spats, jokes and serious debates between cabinet members and military officials are on display for anyone with internet access, a command of the Hebrew language and time to spare.

Then-Prime Minister Levi Eshkol laid out his vision for what Israel should do following the war, namely offering the Golan Heights back to Syria and the Sinai Peninsula to Egypt in exchange for a peace agreement.

“We want a peace and peace treaties, not ceasefire agreements, and we are not interested in temporary resolutions. We’ve had them for 19 years already and that’s enough for us,” Eshkol said.

“Make it clear to foreign figures, especially the United States, that we will not move from this position, no matter the pressures,” he said.
“We’ve turned to peace. We went to war three times in order to reach peace treaties,” Eshkol said.

Haim-Moshe Shapira, a religious, dovish minister, then interjected: “We didn’t go to war. The war happened.”

Eshkol voiced his support for Israel to annex the Gaza Strip and offer its residents full citizenship.

The issue of the West Bank, meanwhile, was hotly contested, long before the government began referring to it by its Biblical name “Judea and Samaria” and its residents began calling themselves Palestinians.

Some Ministers supported annexation, others were for offering the residents an “autonomous region” and some considered a canton system, like in Switzerland.

Eshkol advised caution regarding settling the area, noting that “even a man like Yosef Weiss” — a prominent member of the Jewish National Fund — “said we shouldn’t run back to the Etzion Bloc.”

Then-Defence Minister Moshe Dayan spoke in favour of setting up a group of Palestinian leaders who would “lean in our favour,” sending Eshkol into a fit.

“Suddenly we’ve become an imperial nation!” he shouted, comparing Dayan’s proposal to how the US operated in the Vietnam War.

The newly available transcripts also feature Menachem Begin making his recommendations for what to do with the one million people living in the West Bank.

Begin called for Israel to annex the entire area but hold off on offering citizenship to the Arab residents for a period of seven years, citing other cases of countries taking over territory.
“When a country annexes an area that was not until then under its sovereignty, it has to give the residents a certain transfer period to decide on the option of staying and taking the citizenship of the annexing country or preferring to leave and keep their previous citizenship,” Begin told his fellow ministers.

The famed diplomat and then-Foreign Minister Abba Eban warned that they were sitting on a “powder keg” vis-à-vis the Palestinians.

“We’ve got two populations, one with full civil rights and the other denied all rights. This is an image that is hard to defend, even on the special backdrop that is Jewish history,” Eban said, comparing the situation to that in Algeria when the French ruled the country.
“The world will sympathise with the liberation movement of the one and a half million that are surrounded by the several tens of millions,” he added.

Then-Prime Minister Eshkol’s wit is also clearly evident in the transcripts.
When then Labor Minister Yigal Allon, who took a hard-line approach to the West Bank, told the ministers, “I want to defend my position against those who weren’t here this morning,” Eshkol cut him off and quipped: “You haven’t yet heard them oppose it.”
There are other funny moments as well.

For instance, four days after the war ends, then-IDF chief of staff Yitzhak Rabin discusses with the cabinet about how exactly he should address the threats facing the people working the land close to the Syrian border, who were coming under attack.
One of the areas they were working in was referred to as “De Gaulle’s nose,” a reference to the French general Charles De Gaulle’s prodigious proboscis.

As an aside, Rabin adds: “I hope there won’t be any unpleasantness over the name, but maybe we’ll try to change it.”

Donald Trump believes he can bring the sides together again as in his words, “The Mood is changing in the Arab world” vis-a-vis Saudi Arabia and the Gulf States. Iran and the expansion of Shia Islam across the Middle East are actually bringing Saudi and Israel closer together. It is well known high-level Israeli leaders have visited Saudi for talks, and according to reports Saudi leaders have even visited Israel. There is much co-operation and intelligence sharing between the two countries, and the US president feels the sides could openly work together in the not-too-distant-future. But exactly where and how the Palestinians will fit into this remains to be seen if they continue to deny Israel’s right to exist as a Jewish state.