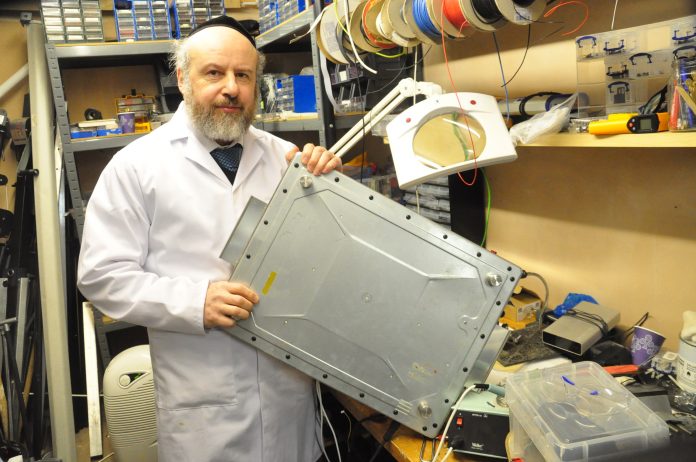 In the electronics industry for almost four decades, Gershon Morris is highly suited to answer a pressing need. What began as a hobby in school ended up with an impressive career that began in an apprenticeship scheme with Ferranti Electronics. Eight years later Gershon was already designing and manufacturing laser systems. Gershon has worked in the UK and Israel defence industry on safety critical programmes, and for several major aerospace companies in the UK.

However, his most recent endeavour is of particular interest to the Jewish community and for more reasons than one.

There are ongoing concerns for the safety of the indispensable Shabbat hot plate, used in tens of thousands of Jewish homes the world over. Too often, low-quality materials are used in the traditional hot plates in order to lessen the cost of their mass production. The heating elements are made of metal springs feeding through ceramic pieces. The ceramic can crack over time, causing a short circuit.

Various international companies have sought to offer suitable alternatives. Gershon’s hot plates have almost 20 benefits over the ones currently on the market.

Given that the primary cause of fires caused by hotplates is the heat element at the bottom of the hotplate coming into contact with wooden material, the first great correction Gershon did was to switch that around. These elements are now towards the top of the hot plate, making the base a full 50% cooler. No longer is there a risk of the surface upon which the hotplate rests, catching fire.

Additionally, the hot plate legs, typically made of plastic, are at risk of overheating as well as becoming detached too easily. To this end Gershon has designed them to be made of metal instead.
The standard PVC cable used could also overheat and catch fire. Gershon explains, “If the house is not properly wired, a short circuit can cause a house fire.” This hot plate therefore contains a heat-resistant cable that will not melt or burn under normal conditions.

Gershon’s website www.madesafer.co.uk contains many safety measures that are a must-read for any hot plate users. Many of these concerns are addressed by the new model. One of them is the “over temperature protection,” meaning if the hot plate were to be left on a hot gas hob or covered with a blanket, the hot plate will simply switch off. The metal handles of the hot plate also do not heat up.

The plate was actually tested for nine hours, covered with a fire blanket, and no damage occurred.

Gershon is also proud that his hot plates are produced in the UK and by the local community in Manchester, offering many young electricians a job opportunity. They are fully CE tested to European Union standards and thereby are of the highest standards of safety. Users can rest assured that the hot plates have been tested for 24 hours before being released.
The good news is these hot plates can last for much longer than the standard ones. This one is designed to last for 30,000 hours, so with an average usage of 24 hours a week, they can be expected to last for 24 years! The stainless steel case also does not rust.

What’s more – users save 40% on electricity, which can mean over £30 per year if used for 24 hours each week, as they are cheaper to run.

The hot plates are now available in London, Manchester and Gateshead, with hopes for future availability in Israel and the United States.

Currently only the standard size is stocked, but Gershon is working on larger and smaller sizes for release around the time of Succot.