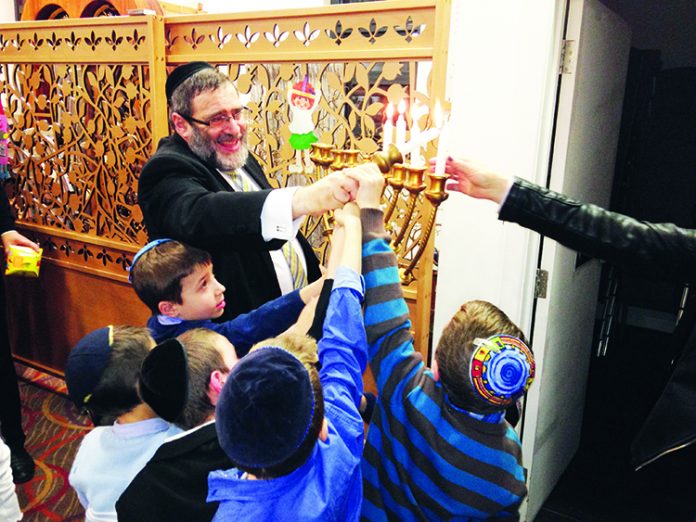 The Hendon Community Campus will ensure the shul remains a flagship of the United Synagogue.

The 21st century facility takes on board Chief Rabbi Ephraim Mirvis’ vision to transform shuls from solely being houses of prayer into a place of religious, social and cultural engagement.

New facilities include flexible prayer and meeting spaces, state-of-the-art conference resources, a banqueting suite, dedicated areas for youth and children (including a nursery), a succah and a coffee shop.

The building will be accessible, space-efficient and environmentally friendly.

“We want to be a community campus because we are not just a shul or community centre, but a place where people can come every day 24/7 if they wish,” said Marc Meyer, Hendon US chairman.

“We are fundraising and £4m has been identified, so we have a further £2m to raise.
“Pre-planning has been done on what we wish to achieve, so once the funds are identified we will go into full project mode.”

Raleigh Close is one of the largest Jewish communities in the United Kingdom.

Founded in 1928, the first site of the synagogue was on Brent Street. The first purpose-built shul was sold in 1940 to Hendon Adath Synagogue, which still occupies the former site.

A derelict site was located at Raleigh Close, and the present synagogue was consecrated on 15th September 1935 at a cost of £20,000 to erect.

A beacon of London Jewry, membership stood at 70 in 1928. Today there are over 1,200 members, with hundreds of people of all ages attending Shabbat morning services.

The shul is a hive of activity throughout the week, which will be enhanced on completion of its transformation project.

Rev. H.I. Alexander, Rev. Leslie Hardman and Rabbi Sidney Silberg served as senior ministers prior to the appointment of Rabbi Mordechai Ginsbury in 1999.

Rabbi Leo Dee was the shul’s first assistant rabbi, tasked in 2008 to enhance the provision of educational and social events, particularly for young families, singles, students and teenagers.

Rabbi Jonathan Hughes, and most recently Rabbi Yisroel Binstock, have continued this work.
Rabbi Ginsbury was brought up in South London where his father, Rabbi Philip Ginsbury, served as a United Synagogue minister.

Educated at Hasmonean Secondary School, he studied at yeshivah in Israel where he attained semichah in 1982.

“We were a very communally orientated family for the community as a whole,” Rabbi Ginsbury recalled.

“I was always interested in the rabbinate and had a passion for Jewish learning, Jewish life and Israel, which drives most community rabbanim to do what they do.

“Having my father as a rabbi was great preparation, and of course, I was able to ask him for advice on various situations.”

After Rabbi Ginsbury married his wife, Judy, in 1982, he continued post-rabbinic studies in Gateshead and then Liverpool, where he gained experience at Childwell Synagogue.

He assumed his first pulpit as minister of Prestwich Hebrew Congregation in 1985.

“Taking up the post at the age of 25, however much you have grown up in the rabbinate and then prepared, you cannot imagine how different it actually is,” he recalled.

“When you take responsibility for a community, it is completely different to anything you have experienced, but I was fortunate to have a very supportive community and spent many happy years in Manchester.”

Since arriving at Raleigh Close, Rabbi and Rebbetzen Ginsbury have heralded numerous initiatives to benefit the community, including the Hendon CARES welfare organisation, the Kashrut Assurance Scheme, the Minyanim Forum, Tefillin breakfast for pre- and post-bar mitzvah boys, and bat mitzvah provision.

P’eir was established during Rabbi Ginsbury’s term of office as chairman of the Rabbinical Council of the United Synagogue, and he was formally appointed as professional director in 2009.

Rebbetzen Ginsbury has facilitated many introductions through the United Synagogue Strike a Match (SAM) programme and is a key teacher of the shul’s Ladies SEED initiative.
Of great significance also has been their support for the recent completion and opening of the Central Hendon mivkah, “Mikvah Eishes Chayil.”

“Being only the fourth rabbi here at Hendon says a lot about the community,” he recalled.
“The Shabbat of my induction was one of those rare occasions when every one of our minyanim was together.

“I’ll always be grateful to have had my opportunity in Manchester, but this was a step up; and walking into shul thinking about the responsibilities I now had for this community was primarily exciting and challenging, but I felt ready.

“It was not an easy decision returning to London but the Hendon community had great challenges and opportunities.

“You only have to look at what we have achieved over the years with wonderful support from lay leaders. Our new mikvah, which opened two years ago, has been a tremendous facility, and we are currently raising funds for our regeneration project.”
On a Shabbat, Raleigh Close offers an early minyan, traditional main shul and alternative cross generational services, and a dynamic Na’aleh minyan for students by students, together with various youth services.

“The community has changed hugely and people are moving on from the idea of a singular, traditional main shul service; but you have to move with the times in terms of minyanim,” Rabbi Ginsbury explained.

“There are hundreds of people at various services every Shabbat; and you have to be here to really experience it. You can feel the vibrancy and vitality.”
He added, “Some of our more longstanding members tell me the level of programming and activities that we are embracing today is phenomenal.
“Much of the credit goes to Rabbi Binstock together with his wife, Leanne, and my wife, Judy, who do a huge amount of work in these areas alongside our programming team.”
Looking ahead to future challenges, Rabbi Ginsbury noted, “I only see opportunities to consolidate what we have in terms of the multiplex nature of the community.
“There is always a struggle between encouraging the individual strengths of constituent parts of the community and building a sense of an all-embracing community.
“That will continue to be a big challenge but also an ongoing opportunity.”
In terms of how programmes have developed, Rabbi Ginsbury commented, “When I first came to the shul, there were many groups run by older members of the community but no succession planning.

“These groups were not carried forward and interest groups were different, but new ones have arisen such as our book club and monthly tea parties.

“Some programmes are cultural, learning or social but we must cater for all members.
“We must also attract the younger end of our community, and that is where Rabbi Binstock together with his wife make a huge difference in this area.”

When it comes to giving inspiring sermons to his community, Rabbi Ginsbury has years of experience.

“Every rabbi is different, but I never sit down and think; now I’ll write my sermon but my general rule is that only the inspired can inspire,” he explained.

“Anything that I have a particular passion for I may build a sermon around, but one continually reads and connects with people and situations that offer inspiration.

“There are also certain moments in the year such as the festivals, or there are topical events that it is natural to speak about.

“But having said that, I’m always thinking about topics connected to the community.”
Rabbi Binstock and his wife, Leanne, have played a key role at the shul since 2015.

“The fact that our shul is designed to be a friendly place helps enormously,” he said.
“There are different Shabbat morning services; if you wish to, daven early then spend time with your children, or have a later start and more informal davening with your children.
“The alternative minyan is a place where children are made to feel welcome more than traditionally they might have in a ‘cathedral’ style minyan.

“We place a lot of emphasis on childrens services and syncing programming to encourage young families to feel at home, and the shul is designed around them.

“Having a young family, I often think when planning activities, will this work for my family if I wasn’t the rabbi? If not, we rethink it.”

So how does a modern day shul attract families with social media now at the fore?
“Many people have seen the rise of social media as a challenge as it breaks away from the need to have a focal point of a synagogue as a place of connection,” Rabbi Binstock explained. “But using it effectively it can assist in bringing people together.

“There was a time when it was very difficult, other that Shabbat, to communicate with 100 members of the community, but now the alternative minyan has a WhatsApp broadcast list, so I can communicate through a medium which works for them.

“Emails are not always the most personal form of communication, but a WhatsApp message is seen to offer a personal touch so you can use social media to really connect.
“Occasionally after Shabbat, I’ll send a ‘sermon in a sentence’ message, although the most common reply is, if you can say it in a sentence why not say it in shul!”

Raleigh Close is taking up the challenges of today head on to serve present and future congregants.

It will not shirk issues, and that has to be the central theme of any modern-day shul.
Chief Rabbi Mirvis and the United Synagogue have a vision for the future. Raleigh Close has taken that on board and is running with it.