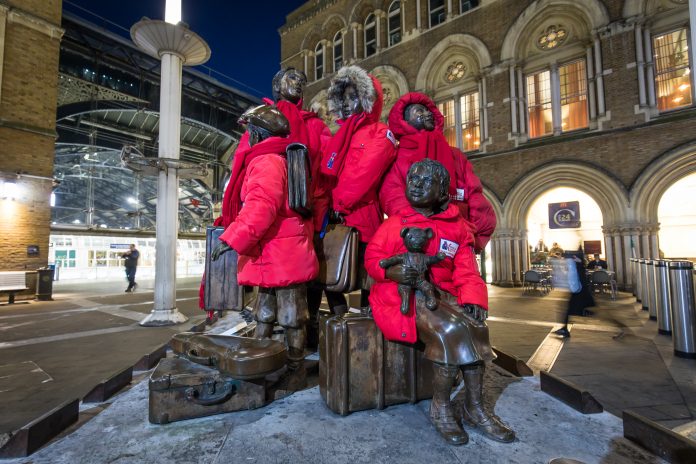 The Association of Jewish Refugees along with World Jewish Relief are delighted to support the Wrap up London 2017 campaign by allowing the placing of bright red coats on the iconic Kindertransport statue at Liverpool Street Station, to help encourage Londoners to donate their old coats to those in need.
The Kindertransport statue was chosen by the charity Hands on London as a hero image for the launch of the Wrap up London 2017 campaign, to help symbolize the number of coats Wrap Up London donates to refugees each winter. It was one of three iconic London statues – the other two being Sherlock Holmes at Baker Street station and Amy Winehouse at Camden Market – which featured in the launch event on 6 & 7 November.
The Chairman of the AJR-Kindertransport committee Sir Erich Reich said “This campaign helps to signify how the underprivileged refugees and unaccompanied children need help today, just as they did in 1938 and 1939.”
In 2016, nearly 23,000 coats were donated, but in the seventh year of the annual collection the number of people living in crisis in London is sadly rising, so the need is even greater – especially when it comes to men’s jackets. Any coats donated will be passed on by Hands On London to those who need them most, including refugee charities, the homeless, the elderly and families in need.
To get involved visit www.wrapuplondon.org.uk and find your local collection point.