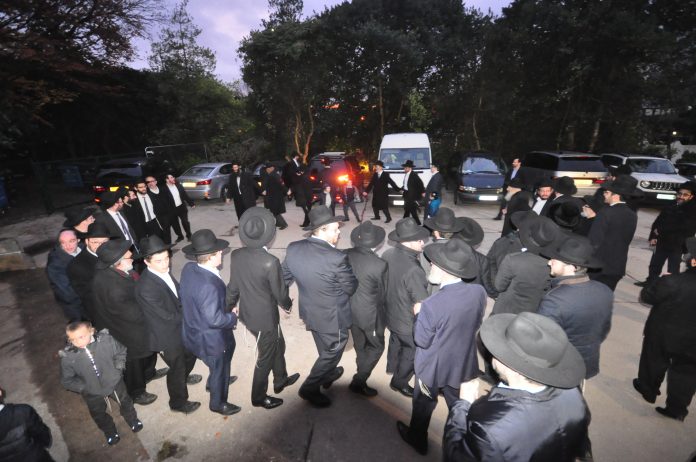 Led by Rabbonim, Roshei Yeshiva and long-standing community leaders together with the prestigious school board, the community showed up in force to celebrate together with the renowned Mechina L’Yeshiva Etz Chaim Boys School. The event was marked by the Keviat Mezuzot at its spacious new premises at The Park Mount, located on Broughton Park’s Bury New Road. The sprawling campus stretches until New Hall Avenue, allowing for enjoyment of space both internally and externally.

Devoted Menahel Rabbi Eli Cohen welcomed the guests and cited the words of the great Ponovezher Rav who related that the cement with which the Volozhin Yeshiva was built had not been mixed merely with water but with the tears of joy and prayer. The inauguration of the school’s new building likewise, he said, arouses in all involved, tears of hope and prayer for the ongoing success of Etz Chaim.

Rabbi Cohen expressed the community’s deepfelt appreciation to the governing body of the school led by a pillar of the community Reb Mordechai Halpern. He alse paid tribute to Reb Dovid Greenblat, Reb Dovi Roberts the S’gan Menahel and Mr David Marlow and gave special thanks to the renowned Baal Chesed Reb Yitzchok Dov Bamberger.

Following the recital of two psalms of Tehillim, the school choir gave a moving rendition of Mizmor Shir Chanukat Habayit as well as the more recent “P’sach Lonu Sha’ar” to the delight of the assembled, expressing the keen feelings of gratitude that the burgeoning community had found a suitable and spacious site.

Rabbi Yaakov Wreschner then addressed the crowd explaining the sacred duty of the community to ensure an educational environment for every child in the community. Etz Chaim School, the Rav explained, has admirably risen above the challenge of shortage of space and funding, to ensure that no child in the community is left without a school. The school also continues to engender the “Voice of Yaakov” to combat the “Hands of Esav” our generation grapples with.

Following a L’chaim, the main entrancemezuzah was affixed by the Satmar Dayan, Rav Yisroel Chaim Horowitz. A spirited dance then broke out as young and old rejoiced in the large front courtyard. Further mezuzot were then affixed by generous donors.
Now educating it’s second generation of students, Etz Chaim continues to occupy a place of pride alongside the dozens of schools Manchester is privileged to have. With the younger years now in triple stream the growth it has achieved since it’s humble beginnings is a credit to its founders and leaders ever since.