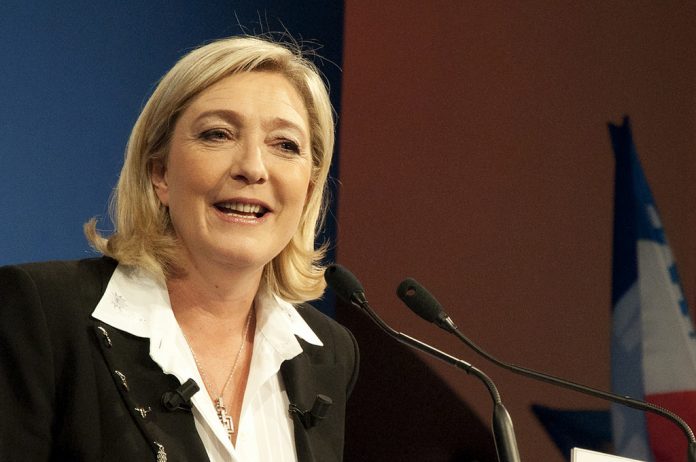 In an astonishing move Marine Le Pen stepped down from leader of the National Front party in what is being seen as an apparent calculated move to appear more presidential as she heads into the second and final round to become the next French president.

With an unprecedented total of 11 candidates last Sunday, Marine Le Pen saw off nine of them and will now face the independent and centralist figure Emmanuel Macron on 7 May.

This will be the first time since the current presidential system was introduced in 1958 that no candidate from the main centre left or centre right parties have reached the final round.

The current president, Francois Hollande, who took office in May 2012, has urged the French people to endorse Emmanuel Macron in a bid to keep out the former National Front leader. Hollande, who did not stand for re-election, has seen his socialist party plummet in popularity in the past two years, and under the new socialist leader, Benoit Hamon, the party received just 6.4% of the vote.

Nevertheless Hollande addressed voters from the Elysee Palace, insisting prices will soar, jobs will be lost and the country will be divided if Marine Le Pen is chosen as the next president. He also spoke of the danger of France “becoming isolated and breaking away from the EU” if Le Pen sweeps to power.

Hollande’s words sounded very similar to the “project fear” that British referendum voters were subjected to last year, but the people still voted Brexit in order to get back control of laws, borders and money. But Hollande is one of many European politicians who still refuse to learn from past mistakes, which could drive the French to a Franxit.

In any case, Hollande is the most unpopular president in France’s history, and it is hard to see how his words will have any credibility on voters.

Speaking at the closing ceremony during Holocaust Memorial Day on Monday night, he said, “Two weeks ago a French presidential candidate [Le Pen] denied France’s responsibility for the deportation of its French citizens to Nazi concentration and extermination camps and denied the French involvement in the deportation of the Jews.”

He went further by saying, “And everywhere the message is the same message: We are not responsible for the Holocaust, we are not responsible for the destruction of the Jewish people that occurred on our border.” Earlier the president of the European Jewish Congress Moshe Kantor said Le Pen was “no less dangerous than her Holocaust-denying father, whom she has tried to hide.”

Francois Fillon, a former prime minister, was once well ahead in the polls, but his campaign was derailed by corruption allegations involving his wife, who was allegedly paid as his non-working parliamentary aide and who refused to resign. Fillon has backed Macron in the next round. But the far left leaning communist candidate Jean-Luc Melenchon, who had looked like he may also reach the final two, which really spooked the markets, has so far not endorsed either candidate.

In a country that has 10 percent unemployed and nearly a quarter of young people out of work across France, it seems to suggests that it never really pulled itself out of the 2008 recession, and therefore this election was about the economy and jobs. But security also became a dominant issue, especially with the killing of another policeman on Paris’ famed Champs-Elysees Avenue. The attack on the eve of the election claimed by ISIS reminded voters there was no sign of an end to the continuous Islamic terror attacks on French soil.

But the EU also played a fairly strong role in the election, with Le Pen and Melenchon both insisting they would hold a referendum on whether France should leave the body, and together they received 41.17% of the vote.

The French are nevertheless angry with the political establishment, and some of the 47 million eligible voters (1.3 million live abroad) said they abstained because they have lost faith in the politicians. Fillon refused to step down over corruption allegations despite losing huge support and is now out of the race. Macron, who served as Hollande’s Economy Minister from 2014 to 2016, cut himself off the socialist party because of its unpopularity, and Le Pen has now resigned from the National Front to try to convince the French people that she can be president for all of France’s citizens.

Even when voters return to their bureau de vote on 7 May, many will still be undecided, faced with paper slips for a former socialist economy minister who became independent –  but many don’t know his agenda – or a former National Front leader who still believes in National Front policies and may even return to the party.

This will be the test of voters’ anger and France’s political establishment, and only one of them will make it to the Elysée palace.

Amid tight security, some 50,000 police officers and 7,000 soldiers were deployed across France in an unprecedented move to protect voters at around 60,000 polling stations.

Four of the 11 candidates were in the race to bag the top two spots which would take them into a final run-off.

The final results from last Sunday found that Emanuel Macron received 23.75%, Marine Le Pen 21.53%, Francois Fillon of the Conservative party 19.91% and the far left communist leaning Jean-Luc Melenchon garnered 19.64%. The socialist party of President Hollande were almost completely wiped out with just over 6%.