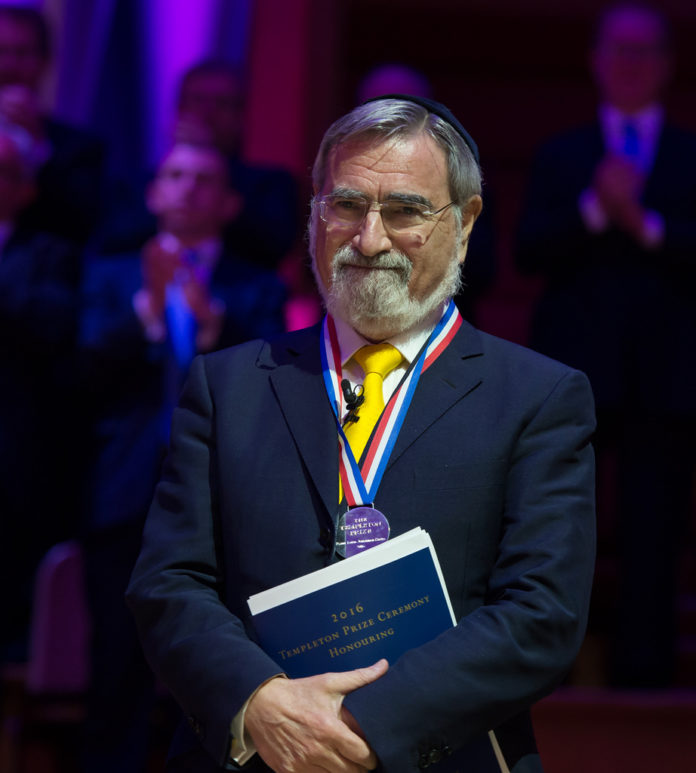 Former Chief Rabbi, Lord Sacks, renewed a stinging attack on Jeremy Corbyn over claims of anti-Semitism in the Labour Party during BBC1’s ‘The Andrew Marr Show’ on Sunday.
Noting that Jews had lived in Britain since 1656, he felt it was “very worrying” when a majority of the Jewish community was asking if the country was safe to bring up their children.
“Anyone who uses the term ‘Zionist’ loosely, without great care, is in danger of engulfing Britain in the kind of flames of hatred that have reappeared throughout Europe, and is massively irresponsible,” Lord Sacks told the presenter.
Lord Sacks had upped the pressure on the Labour leader in a damning indictment during an interview with The New Statesman that made headlines last week.
The former Chief had equated Corbyn’s comments (at Palestinian Return Centre in London in 2013), on “Zionists” as not understanding British irony despite living in the UK for years, as “the most offensive” by a senior British politician since a notorious ‘Rivers of Blood’ speech by Enoch Powell five decades ago.
And he made the connection again to Mr Marr.
“There is danger that Jeremy Corbyn may one day be Prime Minister.  He is the leader of Her Majesty’s opposition and I’m afraid that until he expresses clear remorse for what he has said, and what his party has done to its Jewish sympathisers as well as its Jewish MPs, then he is as great a danger as Enoch Powell was.”
Lord Sacks claimed Jewish people were thinking of leaving the UK because of the current atmosphere.
“When people hear the kind of language that has been coming out of Labour that’s been brought to the surface among Jeremy Corbyn’s earlier speeches, they cannot but feel an existential threat,” he said.
Lord Sacks called on Corbyn to “repent and recant” his comments quickly to regain the trust of the Jewish and general public.
Only last week, Lord Sacks described Corbyn as “an anti-Semite” who has “given support to racists, terrorists and dealers of hate” crisis after his toxic comments.
Judging Corbyn’s actions, he said Corbyn had used the language of “classic pre-war European anti-Semitism” and when challenged, he denied, equivocated and obfuscated the facts.
“He has legitimised the public expression of hate, and where he leads, others will follow,” said Lord Sacks.
“Within living memory of the Holocaust, and while Jews are being murdered elsewhere in Europe for being Jews, we have an anti-Semite as the leader of the Labour Party and Her Majesty’s opposition. That is why Jews feel so threatened by Mr Corbyn and those who support him.”
Lord Sacks continued: “We know our history better than Mr Corbyn, and we have learned that the hate that begins with Jews never ends with Jews.
“Mr Corbyn’s embrace of hate defiles our politics and demeans the country we love.”