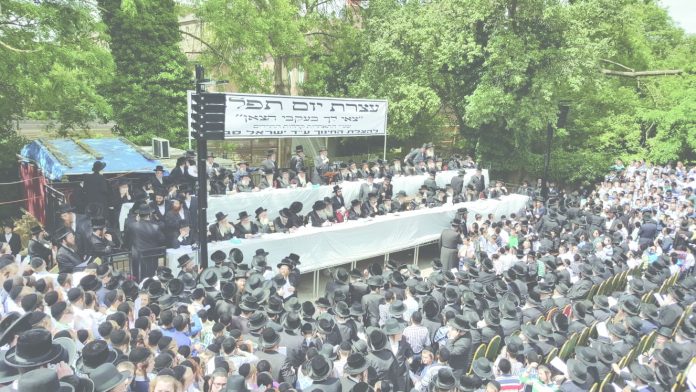 Thousands of orthodox Jews gathered outside Bais Hamedrash Toras Eitz Chaim in north London to demonstrate the strength of feeling to safeguarding ‘orthodox’ education in schools.

Some 7,000 turned out following anger over Ofsted inspectors targeting religious Jewish school’s that refuse to teach certain characteristics covered by the Equalities Act 2010.

New rules provided by the Education Ministry mean that ‘lifestyles’ must be taught among other subjects leading to a number of orthodox community representatives lobbying for leniency when it comes to teaching different sexualities and genders.

The event was endorsed by local Rebbonim in the presence of the Mara D’Asra – the head of the community – and saw close to 7,000 participants come together.

During many addresses, leaders spoke of their gratitude to the Prime Minister and the Government following their repeated declarations about the importance of faith in society.

Looking forward, speakers expressed deep concerns by recent OFSTED overreach yet mentioned their hope that a constructive dialogue could be achieved.

Tributes were also paid to Rabbonim, teachers and support staff who have enabled Torah education to flourish in Stamford Hill.

Rabbi Dovid Frand, President of the Union of Orthodox Hebrew Congregations said, “The exemplary behaviour of these thousands of children throughout this event is tribute to the excellent education and high moral standards that our system delivers.”

“We thank G-d that we are privileged to live in a tolerant country with a Government that has repeated pledged to safeguard religion and religious practice.

“However, there are influential secular forces seeking to impinge on our rights and we have all gathered together in prayer in the fervent hope that we can continue to practice and teach our Torah-true values for generations to come.”

JCC founder Levi Schapiro said the gathering illustrated unity on the issue but lamented the fact that in modern Britain lobbying the Government was necessary to protect traditional religious values.

Rabbonim have voiced fears for a few years that proposed laws will regulate what is being taught at orthodox schools and may force them to close.

And a number of Rabbonim and leading community activists have even questioned whether Orthodox communities have a future in the UK if education policy is not changed.

HaRav Shraga Feivel Zimmerman from Gateshead recently stated that the situation could reach a point where Jews may leave en masse, a view echoed by Rabbi Aharon Klein from the Belzer community in London, who said there would be no future for the Charedi community in England.

“It is very important that within our school’s Torah education and the promotion of a Torah lifestyle should not be compromised, that parents who choose Torah education for their children should be able to receive the very best in authentic Torah tuition,” Rabbi Jeremy Lawrence, Kinloss Synagogue, commented.

“It is nonetheless important that growing up in England, our children should be properly educated in the language, Maths and science so that they will be able to participate fully in the life of this country and to appreciate its values.”

Earlier this month, the Jewish Leadership Council responded to the government’s much anticipated Integrated Communities Strategy ‘green paper’ in response to a review by Dame Louise Casey’s highlighting the number of communities divided by race, faith or socio-economic in 2016.

The paper is the government’s vision to build strong integrated communities based on shared rights, responsibilities and opportunities.

Jewish representatives told the government the idea of ‘British values’ was seen as “hostile and needed to be “unpicked”.

“Rightly or wrongly, for many, the term has negative connotations,” they stated.

“Many instinctively know what is meant by it but for many, it is a hostile term.

“Promoting why it is something which defends everyone is crucial to detoxifying the term.”

Ofsted inspectors have highlighted issues at some religious schools where there is a refusal to teach pupils about different sexualities or gender identities.

For orthodox communities, this issue will grow as the strength of feeling solidifies.