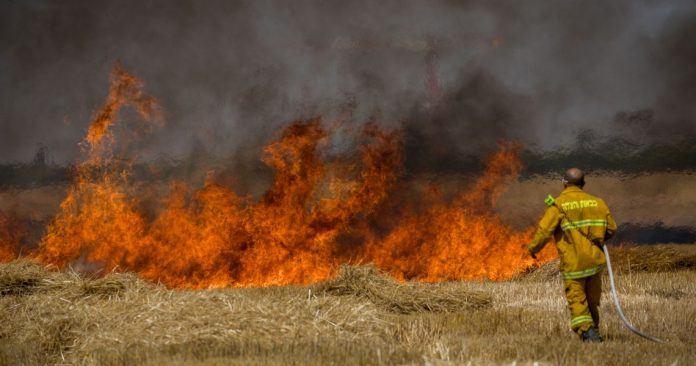 Large fires damaged Israeli fields near the Gaza Strip over the weekend and four missiles were fired into southern Israel.

Three of the missiles were intercepted by the Iron Dome anti-missile system and the fourth failed to cross the border. Alarms sounded in Sderot and the Shaar Hanegev, Eshkol, Hof Ashkelon and Sdot Negev Regional Councils. No injuries were reported.

Knesset Foreign Affairs and Defence Committee Chairman MK Avi Dichter said that his government’s policy “cannot be set by rocket-reprisal. You cannot have deterrence based on air strikes alone. That hasn’t worked, that isn’t working, and it won’t work. Hamas needs to envision the possibility of a massive incursion by the IDF into Gaza, too”.

More than 1,000 acres of fields and forest adjacent to the Gaza Strip were damaged by fires over the weekend caused by firebomb-bearing kites flown out of Gaza. Firefighters, together with local residents of the Nir Am, Or Haner and Kissufim communities, joined forces to extinguish the blaze.

On Saturday, four air tankers and 12 firefighting teams fought against strong winds to try and battle a massive blaze that broke out in the Karmia Nature Reserve. Yesterday, a large fire broke out in the Shokeda forest area and IDF troops defused a kite carrying an explosive.

One official from the Nature and Parks Authority said that much of the region’s vegetation has been destroyed by the fires. “We have fires here and there normally, but the last one in the Besor Stream ate away three square kilometres of the reserve. It’s still hard to say what its effects on nature will be.

The IDF is working toward a solution to prevent kites carrying firebombs from landing in southern Israel. So far they have successfully intercepted 400 kites and balloons. The IDF has also announced it will launch an investigation into the death of 21-year-old Razan al-Najar, who was killed on Friday during the protests along the border. Najar, a medic, was reportedly shot by Israeli soldiers as she approached the border fence to treat an injured man.