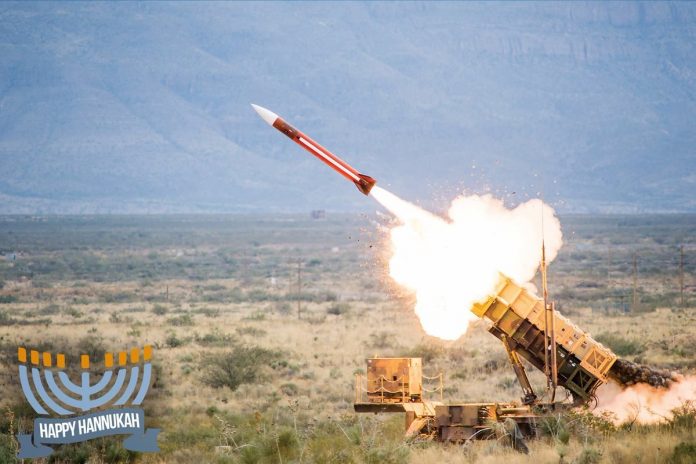 Prime Minister Benyamin Netanyahu, Defence Minister Avigdor Lieberman, IDF Chief of Staff Gadi Eisenkot and many other officials marked the inclusion of “David’s Sling” into Israel’s defence operational system this week.
At the ceremony, which took place at the Hatzor Air Force base, it was described how short-range missiles are intercepted by the Iron Dome defence system, while David’s Sling is in charge of medium-range missiles.
Israel also operates the new Arrow 3 defence system, which protects against long-range missiles. The Patriot defence batteries, designed to bring down manned and unmanned aerial vehicles, will continue to operate for at least the next five years.
The Prime Minister said, “The ingenuity of our people and the fighting spirit of our soldiers multiply our strength against our enemies,” and added, “Whoever seeks to hit us will be hit; whoever threatens our existence places himself in existential danger.”
The name David’s Sling was given based on ancient sources, as Netanyahu explained. “Not far from here is the Ella Valley where David defeated Goliath with his sling. King David defended the People of Israel against its enemies 3,000 years ago. He did so with a combination of extraordinary daring and extraordinary ingenuity. We recognize the age-old adage – those who dare, win.”
Netanyahu, in true Menachem Begin style, then referred to the most famous Jewish King by saying, “As an ancient people that treasures life, we continue to march in the path of King David. David’s sword is in our hand, David’s Sling is in our skies and David’s shield is on our flag. We will join strength to spirit and we will ensure Israel’s victory.”
The Defence Minister said that David’s Sling will enable Israel to deal with the many threats the state faces. “When we look at the map of the world, we see a small pin called the State of Israel. Around us are 58 Muslim countries, with a joint population of 1.6 billion people, ranging from the Middle East to Indonesia and to Kyrgyzstan in Central Asia,” Lieberman told the crowd.
He then noted that more than £176 billion worth of arms were purchased by many of these countries in 2016 alone, not including Iran, and said we are responding to this with “Vision, pride and security.”
Israel’s defence system has no substitute and cannot be bought anywhere else in the world. Although it was mostly American money that allowed Israeli knowledge and intellectual abilities to flourish, the two countries working together clearly benefit one another.
The day clearly marked an important milestone in joint American Israeli development of cutting-edge missile defence technologies. Both countries face increasing sophisticated threats and both demonstrate that together they can meet the challenges.
David’s Sling was developed by Israeli security forces and the Rafael Advanced Defence System over a decade ago, as a way to defend against kamikaze drones and heavy rocket fire. Unlike Iron Dome, which is stationary and defends specific areas of Israel, David’s Sling is portable, thus providing national coverage.