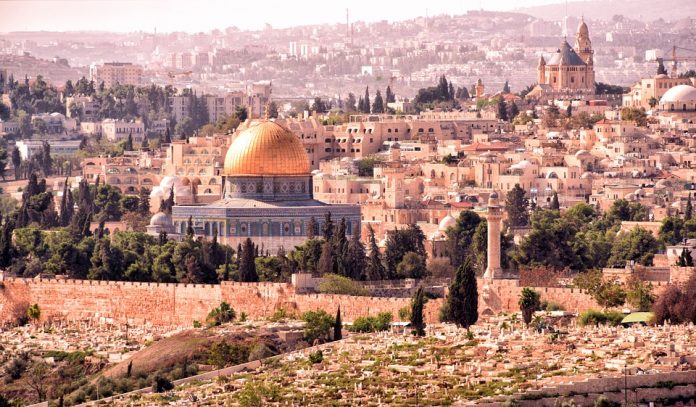 Two civilians and a policeman were injured in the capital’s second knifing attack this week before the assailant was shot dead by security forces. Ahmad Jazal, 17, from the West Bank village of Sebastia, near Nablus, took selfies of himself in front of the Golden Dome on the Temple Mount minutes before the attack and then posted them on social media.
Police spokeswoman Luba Samri said the teenage terrorist stabbed two Jewish youths (yeshivah students) before fleeing, with police forces giving chase. He then stabbed one of the policemen before he was shot.
The victims — two civilians aged 18 and 20, and a border policeman in his early 20s, received treatment at the scene and were taken to hospital. They were said to suffer light to moderate wounds. The attack took place on Haggai Street in the Muslim Quarter.
The photos of Jazal were shared by Palestinians on social media, with some praising the “martyr” for his actions. Soon after the attack clashes broke out between stone-throwing Palestinians and police officers who used stun grenades.
Border guards closed off some of the entrances and exits to the Old City following the incident and cleared the areas surrounding them, pushing back bystanders.
Two days earlier a border police guard shot and killed a woman as she attempted to stab the guards with scissors outside Damascus Gate. The Palestinian Health Ministry later identified the assailant as Siham Rateb Nimir, 49, from East Jerusalem.
According to Palestinian media, her son was Mustafa Nimir, who was shot dead by border police officers in September after an apparent misunderstanding at an East Jerusalem checkpoint.
In the past year and a half, the Old City, and Damascus Gate in particular, have seen several attacks by Palestinians, and in one case a Jordanian national.