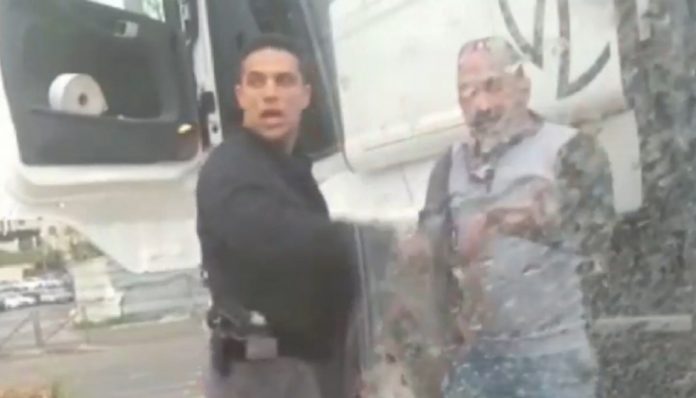 Moshe Cohen was charged with assault, causing serious harm and breach of trust, after he was videoed assaulting an Arab driver and a number of others in an apparent unprovoked attack. The officer, part of the special Yasam forces, was reported to have offered his resignation this week. However, police refused his request, citing they wanted to fire him first. According to the indictment, Cohen’s car was damaged by a truck on March 21 as it was parked in the lot near his workplace in the Wadi al-Joz neighbourhood of East Jerusalem. Cohen checked security cameras the following day, and with unauthorized use of police records, identified the culprit. When he next saw the truck, he confronted the driver, identified as Mazen Shwieki, 48, and an argument broke out. The video showed that Cohen hit Shwieki in the face, headbutted and kicked him, while yelling curses at him. A man approached to break up the fight and Cohen proceeded to curse and attack him too. Cohen was suspended from his job immediately after the incident. The Police Internal Investigations Department also recommended charges against a second police officer, who appeared in the video and witnessed the incident but did nothing to stop it. Two other officers who were passing by and filmed the scene are also to be investigated on suspicion that they also did nothing to end the attack, failing to report it. The footage spread rapidly on social media last week and quickly generated a firestorm, with several Knesset members denouncing the actions of the officer. Public Security Minister Gilad Erdan said the cop’s behaviour was “very grave and worthy of condemnation.” Erdan added, “This behaviour harms the police force as a whole, and it is good that the policeman was suspended.” The Public Security Minister expressed hope that the Justice Ministry’s Police Internal Investigations Department would deal with the case “to the fullest extent of the law.” He also said the police force acted correctly by immediately suspending Cohen.MK Ayman Odeh, head of the Joint (Arab) List faction, responded to the indictment by noting that the Israeli police force is rife with racism and violence. He said in a statement that “the problem with the police is not just one violent officer or another, but systematic racism and a culture of lies that has become an integral part of the system.” Odeh accused Erdan of inciting the attitudes that led to the attack on the truck driver.