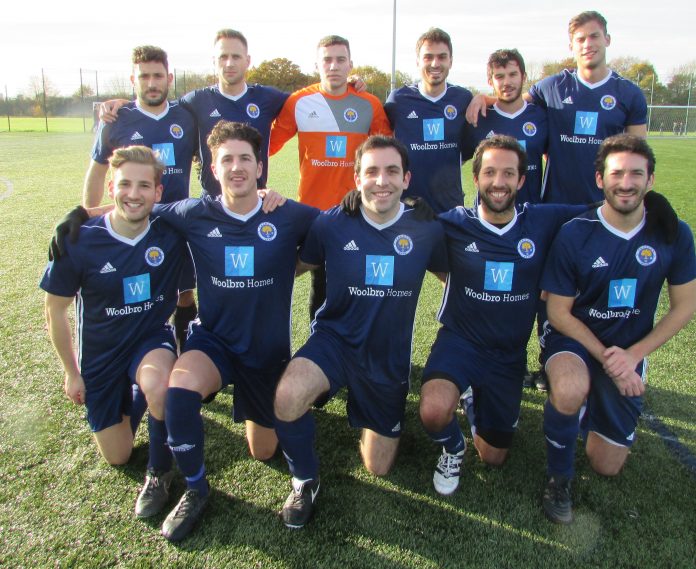 Reigning champions Oakwood A top the Premier Division following a 6-2 win against North London Raiders A.
Josh Cuby, Leor Sidle (2), Brad Wine, Toby Levy and Jonny Quinn struck for the new league leaders.
Jonny Kay and Zack Neiman scored for Raiders.
“This was an excellent display and win from our guys,” said Daniel Kristall.
“We fstarted well, scoring within a minute and the only disappointment was we slightly lost our intensity for a 20-minute spell in the second half.
“Our front three, Wine, Sidle and Cuby, in the first half were devastating. Raiders couldn’t get close to them. We are improving each week after a rusty start to the season.”
Kristall’s team reached the summit following Brady Maccabi’s surprise 3-2 defeat at Maccabi London Lions White.
Ollie Craig (2) and Adam Arnold struck the golden goals.
Reiss Mogilner and Charlie Kasler (penalty) scored for the visitors.
“Unfortunately it was not our day today,” said Maccabi boss Joel Nathan.
“We may have blown our league chances but still have great hopes in both cups.”
Hendon United Sports defeated Maccabi London Lions Blue 2-0 to move level on points with Brady and two points behind Oakwood A with a game in hand.
Yoav Kestenbaum and Moses Seitler scored for the hosts.
“The game should have been put to bed early in the match, but we struggled to hit the back of the net,” said player-manager Greg Corin. “It created some nervy moments but we were deserved winners and would have been a travesty if we would have dropped points.
“There are huge league games ahead so getting the three points today was vital if we want to mount a serious challenge for the league title.”
“The game could’ve gone either way with both teams creating dangerous opportunities,” said Lions manager Sam Marchant. “Our focus turns to the Peter Morrison Cup game against Ley Park where victory is due and nothing less will be accepted.”
Faithfold A top Division One after thumping Los Blancos 7-0.
Ben Shirbini (3), Leor Harel, David Kizneris, David Leiwy and Avi Markiewicz scored for the league leaders.
“Faithfold had to live up to their reputation,” said player manager Markiewicz.
“The win was built on a defence that was solid and a unit.”
North London Raiders B thumped Scrabble 7-0 with a David Dinkin hat-trick.
Anthony Goodmaker, David Esterkin, Simon Buchler and Jake Gilbert completed the scoring.
“For the second week running I’m really proud of the performance,” said joint-boss Doron Salomon. “The winning margin was a reflection of the grip we had on the game.”
“We were well in this game for over an hour and had chances to draw level,” said Scrabble manager Ray Abrahams. “I’m delighted with the attitude and commitment the boys showed in difficult circumstances. They were playing for the pride of this club.
“We find ourselves in a relegation dog fight and with most of our remaining games against teams around us it is vital that we get some players back and start picking up some points.”
Redbridge Jewish Care C defeated high-flying Oakwood B 2-1.
Mill Hill Dons lead Division Two after a 5-0 win against Temple Fortune B.
Ryan Kramer opened the scoring from close range, which was trebled when Richard Reback and Adam Morrow got their first goals for the club.
Harry Moss fired in a second half penalty and Sam Demby calmly slotted home late on.
“The boys got stuck in throughout,” said Mill Hill boss Brandon Hamme. “Pitch conditions weren’t ideal but we still managed to get the ball down and play some great football.
“We will being doing our upmost to replicate our impressive first half of the season.”
“The scoreline doesn’t reflect the game and the fantastic effort from our lads today but full credit to Dons as they took their chances,” commented Fortune manager Darren Zitren.
Second placed Bayern Mincha enjoyed a 7-0 win against Faithfold B.
Adam Ellis (2), Daniel Holder, Akiva Fink, Sam Kantor and Gav Nussbaum hit the target.
Co-manager Alon Pinhas set up four goals aside from hitting the target himself.
“It was a one sided game,” he said. “We beat them in every area on that pitch, it was an unbelievable performance from my boys, they should be proud.”
FC Team edged a nine-goal thriller against North London Raiders C 5-4 to move into third place.
Player-manager Mitch Young notched a hat-trick including a 25-yard strike.
Adam Rones and Danny Myers also hit the target.
“A good win although we conceded some sloppy goals,” said Young.
“Missing so many players we recruited two experience pros in Danny Myers and Ryan Kangisser and both made a difference to the squad. We look forward to going on a winning run now.”
Real Hendon made it three wins in a row after defeating Catford & Bromley 2-1 in a hard fought clash.
Hendon took the lead with a scrappy goal when Adam Hersh tapped home, and they pressed home their advantage through Joe Metliss before half time.
Catford reduced the deficit two minutes from time but Hendon took the points.
“We held our own against a strong and experienced Catford side in difficult conditions,” said Rafi Addlestone.
“Left side pairing Gali Kolt and Zvi Noe stepped up to the plate today – what they both lack in stature, they made up in sheer guts. Bravo to the lads.”
Kai Vale smashed home a volley after nine seconds as Fairlop FC recorded a 10-0 win at Hertswood Vale.
Daniel Rosen scored a hat-trick backed up by goals from Adam Goldman, Kai Vale, Matt Berkley, Aaron Dias, Brad Gayer, Ryan Cole and Daryl Rubin.
“From the first minute we controlled the game really well and it could have been any scoreline,” said Dias.