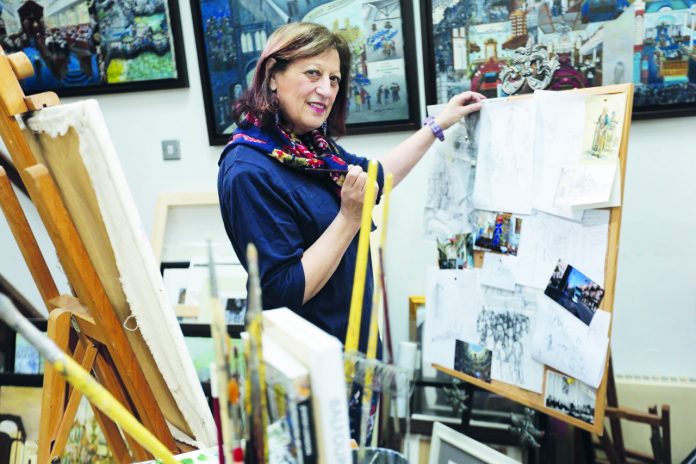 Balfour Accomplished is the latest original artwork by the Award-winning British artist, Beverley-Jane Stewart.
Recognised for her exploration into the relationship between Jewish and British cultures, Stewart’s large scale oil on canvas features imagery from the past and present to commemorate this year’s 100 year Anniversary of the Balfour Declaration – the historic letter dated November 2, 1917 from the United Kingdom’s Foreign Secretary Arthur James Balfour to Lord Rothschild, expressing the British government’s support for a Jewish homeland in Palestine.
In Balfour Accomplished, Stewart has created a multi-faceted, thought-provoking piece, depicting a period of complexity and diversity. Featuring imagery from a time of turbulence and change, her painting tells the story of a unique period of history to illustrate the cementing and stabilising of a lost nation and the story of the Balfour Declaration connecting to modern Israel and the Jewish destiny.
Beverley-Jane comments, “Balfour in 1917 occurred at a time when Jewish people were experiencing massive pogroms and persecution in Eastern Europe. It was recognising the fact that people had a right over their own destiny. This was a bold and brave action for a British politician to initiate. I still believe that whatever a person’s religion or ethnicity, they have a right to be in control of their lives. This is still sadly relevant in today’s society where many people have lost their identity. This could be interpreted as a utopian wish but as an artist I aim for ideals.”
Stewart’s work is due to be unveiled as the centrepiece of an event dedicated to the Balfour Declaration at this year’s Jerusalem Biennale for Contemporary Jewish Art. Stewart’s main painting, Balfour Accomplished, and a series of etchings on which she has focused on topical and thought- provoking themes in connection with Balfour, will be on display at Jerusalem’s Machtarot Museum (the Underground Prisoners Museum) as part of the Biennale from October 1 – November 16, 2017.
The Biennale will showcase the work of nearly 200 Israeli and international professional artists in dozens of exhibitions hosted in eight venues throughout the city centre of Jerusalem. The theme of JB2017 is Watershed and the exhibition dedicated to the Balfour Declaration will mark one of the most important Watershed moments in recent Jewish History.
Stewart continues, “I am honoured and extremely excited to have been invited to exhibit at this year’s Biennale and in particular, to have been asked to paint my interpretation of the Balfour Declaration. Researching the piece both in the UK and during my recent travels to Israel has been fascinating and rewarding and I am looking forward to conveying this in my work along with marking the significance of this date in both Jewish and European history.”
Ram Ozeri, Founder of The Jerusalem Biennale, comments, “I can say the event around the Balfour Declaration in general, and Beverley-Jane’s work specifically, are one of the most exciting things for me as I look towards the Jerusalem Biennale 2017. Beverley-Jane’s work is truly unique in the way it brings the evolution of Jewish and British identity to life and we are delighted to be able to showcase her work, as one of our lead artists, at this year’s festival.”