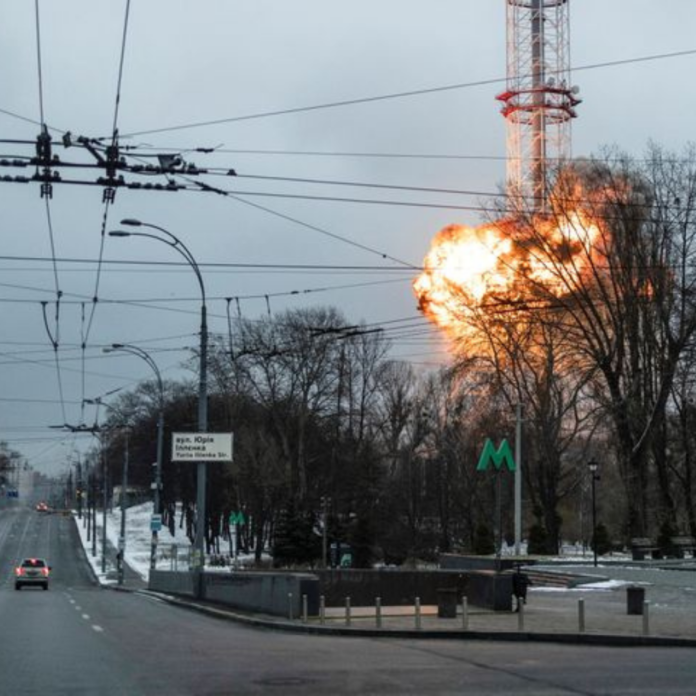 Jewish leaders and organisations have condemned President Vladimir Putin and Russian forces after Babyn Yar Holocaust Memorial Centre was damaged during an attack of Ukraine’s capital this week.

Ukrainian President Volodymyr Zelensky confirmed five people were killed in a strike at a TV tower in the city.

Unprovoked hostility began a week ago. A 40-mile convoy of Russian armoured vehicles is approaching Kyiv.

“What is the point of saying ‘never again’ for 80 years, if the world stays silent when a bomb drops on the same site of Babyn Yar?”, Zelensky tweeted.

President Isaac Herzog noted, “The attack epitomises the terrible tragedy that we are witnessing unfolding in front of our eyes. We express great pain and suffering over what is happening there.”

Prime Minister Boris Johnson joined Zelensky’s assessment at during PMQ’s when he said that bombing innocent civilians “fully qualifies as a war crime”.

PMQ’s began with a minute’s applause, not normally allowed in Parliament. Many MPs wore yellow and blue of the Ukrainian flag in solidarity.

Johnson blasted Putin’s “abhorrent assault on a sovereign nation”, adding he had “gravely miscalculated” the Ukrainian people’s resolve to fight whilst the “free world” was “standing up to his barbarism”.

Johnson this week condemned Putin for engaging in “barbaric and indiscriminate” tactics targeting civilians during a visit to Poland. He added that the UK had set aside £220m in humanitarian aid.

US President Joe Biden,, in his first State of the Union address vowed to defend democracy in Europe and punish Putin for a “premeditated and unprovoked” invasion of Ukraine.

“He thought he could roll into Ukraine and the world would roll over,” Biden said. “Instead he met a wall of strength he never imagined.”

The United Nations has stated that around 800,000 people have now fled the war-ravaged country as Russian forces continue to bombard Ukraine with missile attacks.

Ukrainian authorities stated over 2,000 civilians had been killed whilst rescuers had put over 400 fires and 400 explosives following shelling in the north, east and south of the country.

Peace talks were reportedly set to resume last night between Russia and Ukraine, according to Russian state news agency Tass. A first round of talks took place on the Russian-Belarusian border earlier this week but failed to reach a resolution in an ever-changing narrative.

In a statement they called on the international community to safeguard civilian live and historical sites due to their “irreplaceable value” for research, education and commemoration of the Holocaust.

“Rather than being subjected to blatant violence, sacred sites like Babi Yar must be protected,” Yad Vashem noted, adding, “The security and wellbeing of civilians must be universally and absolutely respected. We continue to follow with grave concern the outrageous acts of aggression being perpetrated against civilian targets in Ukraine.”

He said in a statement, “Putin seeks to distort and manipulate the Holocaust to justify an illegal invasion of a sovereign democratic country is utterly abhorrent. It is symbolic that he starts attacking Kyiv by bombing the site of the Babyn Yar, the biggest of Nazi massacre.”

The leadership of the Babyn Yar memorial blasted Putin’s use of language related to the Holocaust and planned to submit war crimes committed by Russian forces to the International Court of Justice in the Hague.

“We are deeply outraged that the aggressor country has used genocidal rhetoric to justify its shameful actions,” noted a statement. “Russia has vulgarly instrumentalised anti-Nazi rhetoric and is trying to take on the role of a fighter against Nazism.”

The statement added, “We remind the Russian leadership that Kyiv, Kharkiv, Kherson, Mariupol and other Ukrainian cities were last subjected to massive bombing by Nazi Germany during World War II, now they are burning under the blows of Putin’s army, under the false and outrageous narrative of “denazifying” Ukraine and its people.”

The Board of Deputies and JLC wrote in a joint statement, “There is a reason that Ukraine’s President, Prime Minister and Minister of Foreign Affairs, amidst the tragedy of Ukrainians fighting and dying for their country, have all seen fit to comment on this particular attack. Babyn Yar was where the Nazis murdered Jews in the tens of thousands. Vladimir Putin falsely claimed that the Ukrainian Government are Nazis. Now his forces have bombarded a site commemorating an infamous Nazi atrocity. And five more deaths have been recorded at Babyn Yar. We pray for the Ukrainian people, who are facing death, destruction and displacement. We hope our Government will continue to do everything it can to help Ukraine defend itself and prevent any further loss of life.”

Financially, the value of the Ruble has plummeted whilst global companies including Apple, Google, Ford and Exxon Mobil have acted.

Israel has sent humanitarian aid to Ukraine through Poland, Interior Minister Ayelet Shaked has allowed all refugee from Ukraine to enter Israel.

The Israeli consul in Romania helped some 100 Jewish children from an orphanage in Zhytomyr cross the border into Romania.

“Given our deep ties with both sides, we are willing to contribute to the diplomatic effort if so requested and have been trying to do so in the last couple of weeks,” she said.

Prime Minister Naftali Bennett has spoked with Putin and offered to mediate between Russia and Ukraine to end the war.

Bennett has also spoken with Zelensky, who asked him to reach out to Putin on his behalf.

Bennett told his weekly cabinet meeting, “We pray for the wellbeing of the citizens of Ukraine and we hope that further bloodshed will be avoided.” He added, “We are acting in a measured and responsible manner.”

Israel has large communities of Ukrainians and Russians. In 1991, around million people immigrated to Israel from the former USSR, including hundreds of thousands from Russia and Ukraine.