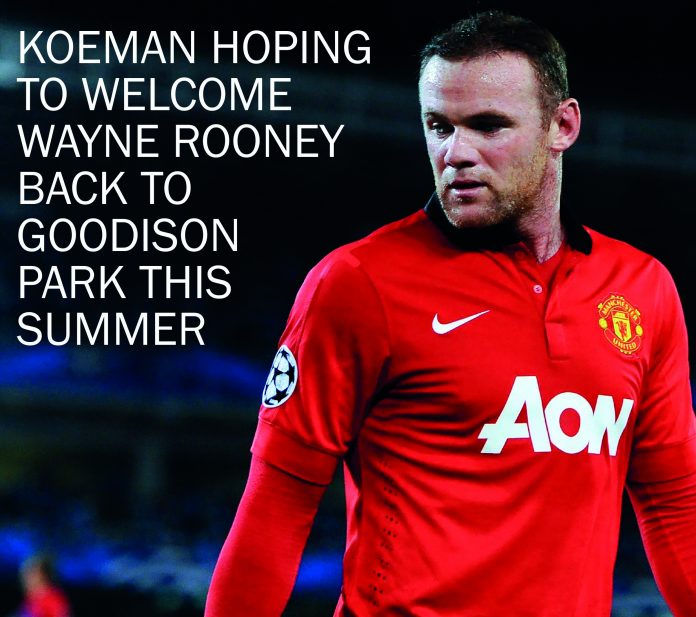 Dutch manager, Ronald Koeman, has claimed that he would happily welcome Wayne Rooney back to Goodison Park this summer.

Manchester United’s record goal scorer is said to be interested in a move back to his boyhood club, having struggled for first-team football this season under Portuguese manager Jose Mourinho.

Wayne Rooney’s agent was reportedly in China last week sounding out interest for his client.  However, the 31-year-old’s statement insisting he aimed to stay at Old Trafford this summer looks to have poured cold water over an Old Trafford exit.

However, his long-term future remains in doubt, with Koeman ready to make a move for Rooney as soon as this summer:

“I believe that Wayne Rooney is still playing at a high level,” the Dutchman told Sky Sports . “I think he made a good choice to stay at Manchester United and in the Premier League because he has still two or three years in front of him to play on a high level.

“What will happen at the end of the season? I don’t know but in my opinion he is one of the players who can make Everton more stronger. It’s all about what the player likes, what Manchester United needs to do, and we are not involved in that project. But every player that we at Everton think can make the team stronger is welcome to Everton.”

The England captain developed through the ranks in the Everton academy, having joined at the tender age of nine, with his mid-teen rise to prominence catapulting Rooney into an Everton regular at the age of 16.

The opening day of the 2002/03 campaign marked the young striker’s Premier League debut against Tottenham. Six weeks later, he became Everton’s youngest scorer with a brace against Wrexham in the League Cup. He then went on to score his first Premier League goal a fortnight later – a last-minute winner against Arsenal which flew into a top left corner.

Short after, Everton became helpless in preventing their young prodigy leaving for the bright lights of Old Trafford, with Rooney making the move in the summer of 2004.

Koeman’s aforementioned comments were then backed up by director of football, Steve Walsh, who said it would be remiss of the club not to be interested if Rooney was available.

“Wayne Rooney is one of the greatest players that has ever played the game in England and for us not to be interested would be wrong,” he said. “He started his career here and if the opportunity arose that he could come back and it sat well with everyone, it is something we would consider.

“He is a class apart, he sees things, and all the things that have been said about Wayne are true. He comes into that category of being one of England’s greatest ever players, so why wouldn’t we be interested? I think the whole thing would be euphoric. I think we could sell a lot of shirts, that’s for sure. But let’s not get ahead of ourselves. Wayne is contracted to Manchester United and made a decision to continue to play for them. Let’s wait and see what happens in the future.”

While Everton are looking ahead to the summer transfer window, there is also much to be done about tying Everton’s top scorer Romelu Lukaku to a new contract.

The Belgian’s agent, Mino Raiola, said in December that a deal was “99% done” and on Monday claimed it was now “99.99% done”, with Walsh optimistic about  a deal being completed.

“I think once you have success at a club, you have a feeling for it, and there is a real feeling that Everton is a club he is part and parcel of and I think he’d like to continue with that,” Walsh added. “For him to sign his contract is that logical next step and we are all hopeful that is going to happen.”

Walsh believes with more new signings, the club can become contenders for Champions League qualification. “The fact we have bought people like Morgan Schneiderlin sends out the message we want to get better and we will get better,” he said. “We want to be successful, we want to get into the top four and you only do that over a period of time and, given that time, we are going to get there, there is no doubt.”

Leicester City players have expressed their desire to see Craig Shakespeare installed as the permanent manager beyond the end of the season, says Danny Drinkwater.

A brace of impressive 3-1 wins over Liverpool and Hull City in the Premier League helped Craig Shakespeare kick start his career as Claudio Ranieri’s replacement until the end of the season.

Sevilla marked Shakespeare’s first Champions League test, with the Foxes trailing 2-1 from the first-leg encounter. What ensued was a clinical home performance which saw Leicester progress to the quarter-finals of the competition with a 2-0 victory.

Another character forming display followed in the Premier League, with a dramatic late 2-3 victory secured against West Ham, marking the return to form of star players Jamie Vardy and Riyad Mahrez.

Given Craig Shakespeare’s positive influence since being appointed, it appears the Leicester City players have given their full backing for the board to appoint him as the permanent manager of the club beyond this season.

“It’s a great appointment, a good fit,” midfielder Drinkwater told a news conference. “We don’t have much time to turn things around but we could not have got anyone better at this moment.

“As a manager he has taken on board everything and passed what he can on to the players, which is excellent for us.

“He hasn’t changed that much and that is a good thing. He needs to take control of more things as manager, which is his duty, but any changes he has made have been positive.

“He helps us enjoy our football. Just do the simple things and hopefully the rest will shine through.

“He was huge last season. He helped Claudio settle in, and was a link between the manager and players. He’s done that excellently since I’ve been working with him.

“On behalf of all the players, we’d like to see him get the job long term. We were all very happy to see him get it short term, I’m sure it would be the same reaction longer term.”

Drinkwater concedes that Ranieri’s sacking may have been required to snap Leicester out of a slump that had seen the champions fall into the relegation zone.

“I think it’s been a long time coming, I think we’ve waited a long time, for the results, for the performances,” he added.

“It might be the new gaffer, it’s hard to put your finger on. But as long as it has changed and we’re now getting the results – that’s the most important thing for us.”

Whether you love him or hate him, Shakespeare has brought a breath of fresh air to a team that was slumping in to a serious relegation scrap. Therefore, although you may disagree with the way Ranieri was sacked, it would be hard to disagree with the results following his departure.