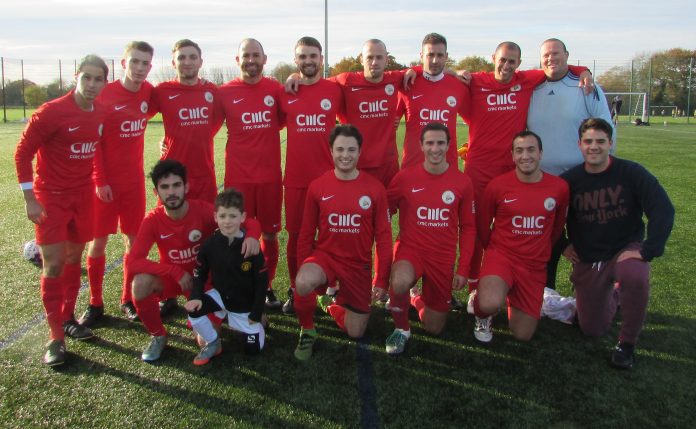 Hendon United Sports top the Premier Division after a 7-1 victory against Brady Maccabi.
Dovi Fehler struck a hat-trick and Zac Lewis notched a brace as Hendon head Oakwood A on goal difference.

Rafi Kon and Ari Last also scored for the new title favourites who have a game in hand on Oakwood.

“It was a fantastic performance from the team,” said Hendon manager Greg Corin.
“We dominated throughout today but Brady were still in the game at half-time with the score only 1-0.

“We had a tactical chat at the break and a few minutes of excellent wing play by Yoav Kestenbaum found ourselves a few goals in front. The team continued to play at a good tempo until the last kick and by the end, the result was well-deserved.”

Oakwood A dropped two crucial points in a hard fought 1-1 draw at Redbridge Jewish Care A.

The visitors opened the scoring through Brad Wine only for Steve Summers to equalised on the hour with a close range finish.

“A tough day out in Essex where I felt we just edged the game,” summed up Oakwood boss Adam Kristall.

“The pitch and conditions were atrocious. It restricted us playing our fast flowing attacking football. They battled well but we dominated the opening hour of the game although we tired and in the end it could have gone either way. I can’t argue with the result.”

Kristall added: “The result shows how far that we have come as a team, we are disappointed with this draw but it’s a good point. The league is strong, Hendon are favourites but they have tough tests to come so nothing is decided yet. We will keep fighting and once we recover injured players, we will be in the mix at the end of the season.”

Oakwood B enjoyed a 3-0 win over injury-hit Scrabble.

“At our best we can create numerous chances but today we put them away clinically. We needed it after weeks in which we were disappointed to only take one point from two games.

“We are pleased to do the double over Scrabble who are historically a tough opponent.”
Scrabble, missing six first team players, battled to halt a poor run of results and manager Ray Abrahams was philosophical at full time.

“Oakwood are a good side and deserved to win the game on the day,” he said.
“We lost the midfield battle after their first goal went in, but all three goals were fortunate.
“The first was a ricochet, our keeper Adam Solomons got a hand to the second then the referee made a huge mistake for the penalty as he gave handball when the ball clearly hit the players’ side.

“On another day that would never have been given and at 2-0 you’ve still got a chance. That decision effectively killed off the game.”

He added: “The boys are disappointed but we looked a lot better today particularly in the second half and had a few chances that we failed to take.

“At the moment we can’t buy a goal, let alone pick up points, but we have to keep working hard and I’m confident we will turn things around.

“We’ve played the top three twice so it’s in our hands against teams below us to make sure we pick up enough points to start pushing up the league.

“The last thing we want is to get drawn into a relegation battle.

“Due to a ridiculous number of injuries we’ve used nearly 40 players but everyone in the squad has done us proud. There is great camaraderie and determination to finish the league season strongly and have a good Cup run in the Supplementary Cup which starts in two weeks.”

The match between Redbridge Jewish Care C and North London Raiders B was postponed due to a waterlogged pitch.

This was a must-win game for Bayern as Dons have two games in hand over the league leaders.

After Bayern ‘keeper Joseph Nyman kept his team in the game in a goalless first half player-boss Alon Pinhas opened the scoring on the hour. Adam Ellis fired home a brace to seal the win.

Aron Gale scored a consolation for the Pirates late on.
“Our attack couldn’t get the

final touch in the first half but we really stepped it up,” said Pinhas.
“It was a good game of football and could have gone either way. We now look forward to our match against Dons next week. Hopefully we will win and make the title challenge more interesting.”

“We matched Bayern all over the park for 60 minutes, creating attacks and causing their defence plenty of problems,” said Pirates manager Elliot Cuckier.

“Unfortunately, their keeper kept them in it when we should have gone ahead, but we showed in our debut season we are able to mix it with the best and take the game to them.
“Some of our boys had brilliant games and on another day more would have been on the score-sheet.

“We now have two crucial games in the next few weeks so look forward to the next challenge.”

Third place FC Team kept up their title challenge with a dominating second half performance in a 4-1 win over Temple Fortune B.

A Richard Salmon brace, David Grossman strike and an own goal proved decisive.
“Fortune’s goalkeeper kept them in it with a number of fine saves so we didn’t feel too aggrieved to be drawing at the break,” said player-manager Mitch Young.
“It was a sound performance in the end and we also managed to give everyone decent game time.”

“We knew today wouldn’t be as easy. Faithfold brought players in from the ‘A’ team, but once the first goal went in the game was never in doubt.”