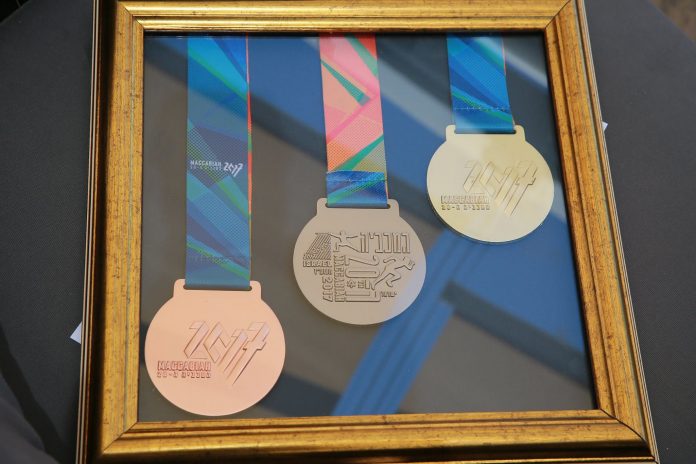 The sense of anticipation was palpable last Sunday amongst 200 plus members of Team Maccabi GB as they jetted off to the 20th Maccabiah Games from Luton to Ben Gurion Airport in Israel.
Amidst swimming, football and other associated teams heading out to the biggest sporting event for Jewish athletes were participants aiming to win gold medals. For others, taking part in this four-yearly event is a once in a lifetime opportunity too good to miss.
Away from the sporting chat, talented teens joked, played charades, listened to music, in fact anything to while away the five-hour journey to Tel Aviv.
Of course, this was a pretty easy task as there is so much to look forward to.
The competition itself has already begun with preliminary events, but the main action kicks off following the opening ceremony at the Teddy Kolleck Stadium in Jerusalem this week.
Some 10,000 athletes from 80 countries are taking part in 47 sports. Chatting to heady youngsters, away from the competition itself, taking part in the opening extravaganza is clearly a moment never to be forgotten.
For Bernard Davidson, Brian Green and Jack Mattey, the occasion will be extra special as they are flag-bearers for Team GB.
And carrying the Union Jack flag is a highest honour for recipients.
The 400-strong British delegation have now arrived in Israel and are making final preparations to acclimatise for the forthcoming competitions.
Preliminary events started earlier this week before the main activity kicks off after the formal opening of the Games that will be televised live on Israeli television.
A total of 47 sports are scheduled to take place from July 4 to 18.
A record 10,000 athletes from 80 countries will compete in events the length and breadth of Israel.
“Carrying the flag at the opening ceremony for any member of the squad is the greatest honour we can give,” commented Maccabi GB General Team Manager, Joel Nathan.
“I will feel great pride in walking behind Bernie, Brian and Jack who represent everything that Maccabi GB stand for.
“Bernie is a veteran of seven Games and fully deserves the honour of carrying the union flag and what a great story it is that his two granddaughters, Jazi and Ella, will be competing.
“Brian has been involved on the managerial side of squads for the last 15 years and this honour is fully deserved for everything he has put into Maccabi GB.
“Jack is one of the up and coming lights of Maccabi GB and I have high hopes that he will be a main stay in future squads for years to come.”
Nathan added, “Good luck Team GB and bring on Israel.” ”
Davidson is part of the Lawn Bowling squad, and is the oldest member of the delegation.
A seasoned campaigner, he has been involved with the Maccabi movement for over 50 years.
His attendance at this summers’ games will mean he has represented Maccabi GB an astonishing seven consecutive times consecutively.
Davidson’s highlight of all the games he has attended was when he participated with his late wife, Patricia, at the 15th Games in 1997.
His granddaughters participate in the Football and Junior Netball teams.
On the sporting front, Davidson is confident the Maccabi GB Lawn Bowlers will challenge for a medal. “We have a strong squad and it is an honour to be asked to lead the team out at the opening ceremony.”
He added, “I want to wish everyone good luck and good sportsmanship for what promises to be an incredible Games for us all.”
Green was first involved with the Maccabi movement as a 21-year-old manager of Boys U14 and Girls U14 Football for Glasgow Maccabi.
His continued passion for football saw him appointed in managerial positions for eleven International Games with Maccabi GB, six with his wife, Helena, as Delegation Head of Maccabi GB JCC Maccabi Games squads.
When asked what it means to be appointed as a flag bearer, Green said,
“I am truly humbled and grateful to be given the opportunity of carrying the Maccabi GB flag at the opening ceremony and leading out the Great Britain delegation along with Bernard and Jack.
“It is an honour that I truly relish and I am very proud to represent this great organisation and country.”
Jack Mattey, 17, will fly the flag of Maccabi GB‘s lead sponsor, UJIA.
The talented teen has already made a mark in Jewish sport having started his playing career with Maccabi London Lions when he was just six years of age.
His first experience representing Great Britain was at the 2013 JCC Maccabi Games in Orange County and then again in New Jersey 12 months later.
To date, Mattey’s sporting highlight came with Maccabi GB at the 2015 European Maccabi Games in Berlin when he won a gold medal as a member of the Football U16 squad.
“It means so much to me to be a flag bearer at the Maccabiah Games this summer,” Mattey said,
“My dad represented Team GB in 2001 and has always spoken about the opening ceremony in Israel as being of the most amazing moments of his life.
“I am so proud to have been chosen to hold a flag and I know my dad will be looking down on us all.”