This week, we start the chapters of Tehillim that are said each Tuesday by people who follow the weekly cycle. If you don’t currently follow the cycle, perhaps the week before the giving of the Torah  is a good time to start! We visit the puzzling episode of King David’s sin with Batsheva. There are people out there who rightly question how such a righteous individual could commit such a sin, however they wrongly jump to conclusions based on their own limited knowledge.

There are certainly questions on King David’s behaviour, and he was punished by Hashem at the end of his life for his sin, however there is absolutely no doubt that if he wasn’t fully righteous, Hashem would not have allowed him to build the foundations of the Beit Hamikdash, and for his book of Tehillim to be circulated around world Jewry for millennia, still be used in our prayers until this very day.

Whilst this column is not quite the place for an in depth analysis of the situation and one should delve further elsewhere, in a nutshell David sinned only ethically, not technically, as Batsheva was legally divorced and her ex Husband Uriah had forfeited his life by defying the King.

King David is visited by Nathan the prophet, and told of his upcoming punishment following Hashem’s judgment of his sin. David asks Hashem for forgiveness. His words ‘Lcha lvadcha chatasi – against you alone did I sin.’ The fact that David stresses the words ‘you alone,’ indicates as we said before that he technically did not violate the letter of the law, rather it was a private sin against Hashem.

‘Lmaan titzdak bdovrecha, tisceh bshoftecha – you are justified when you speak, and faultless when you judge.  King David acknowledges his sin and accepts his punishment with love. ‘Hein bavon chololti, uvchet yechemanti imi – Indeed, in iniquity was I fashioned, and in sin was I conceived.’ The king of Israel states the well-known fact, that man is born with sinful impulses within him, which are present from conception.

The Ibn Ezra learns from here how vital it is that we properly control these urges and channel them for the good. If we do so, we will all become truly righteous and merit to see the Temple that 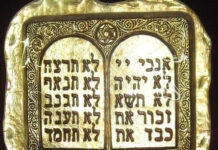