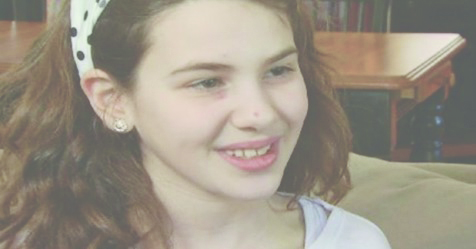 “When life hands you lemons, make lemonade” is a favourite epithet of Maya Rigler, the thirteen year old girl whose life thus far has touched thousands.  Although she has been approached with requests to relay her story publicly to large audiences and her achievements have won her great acclaim worldwide, the girl with a heart of gold and indomitable spirit does not consider herself to be remotely extraordinary.  The incontrovertible truth though, is that there are very few thirteen year olds whose very existence, whilst having been marred by adversity and tinged with sadness and pain, has the power to move those who know her and even those who have never had the privilege of meeting her.

At age two, Maya was diagnosed as having Wilms’ tumour, also known as nephroblastoma, a cancer of the kidneys that is notorious for predominantly affecting children. She was forced to undergo chemotherapy and radiotherapy for eight months and doctors had no option but to remove one of her kidneys.

Traumatically, when Maya was ten years old, doctors in her hometown of Philadelphia discovered that she had the rare form of malignant tumour known as Ewing’s Sarcoma of the pancreas. Once again, she was subjected to a gruelling schedule of chemotherapy and six weeks of radiation. However, G-d had mercy on this little girl who had suffered so much in her short life, and now, three years on, she is no longer plagued by the cancers which had blighted her formative years.

Subsequent to her recovery from Wilms’ tumour, Maya and her two brothers had become associated with Alex’s Lemonade Stand Foundation (ALSF), a charitable organisation dedicated to raising funds needed to promote research into childhood cancers. Maya’s desire to become involved with ALSF had been aroused by the well-known story of the little girl, Alex Scott, whose sheer determination had enabled her to become the driving force behind the establishment of the entire organisation of ALSF before her death from cancer at age eight.

ALSF encourages people to set up lemonade stands and to donate the proceeds raised to the charity. Consequently, every year after her initial diagnosis at age two, Maya and her siblings would host a lemonade stand in aid of ALSF.  Little could anyone predict, however, that she would be beset by the dreaded illness once more at age ten.

By the time Maya was diagnosed with Ewing’s Sarcoma, she’d only been on this earth a decade but her sensitivity and thoughtfulness for others belied her youth.  Though grateful for the generosity and kindness of her many well-wishers who showered her with gifts, Maya had immense sympathy for fellow patients on the oncology ward who were not fortunate to be blessed with the same level of support from family and friends.  With a maturity well beyond her years, she was also acutely aware that though her recovery was not guaranteed, there were some patients for whom the doctors held no hope of survival whatsoever.   Her heart bled for them.

Consequently, through online forums and all the means of contact at her disposal, she beseeched those who knew her  – and many who did not – to refrain from giving her presents but to rather donate money to ALSF.  She was motivated to set up an online “virtual” lemonade stand.  Maya explained that she was too unwell to actually sell lemonade  but entreated people to contribute money as if it were being sold.

Although some family members and school friends had felt impelled to set up actual lemonade stands in her honour and thereby raise funds for ALSF, the virtual lemonade stand reached a far larger number of people all over the world due to being featured online. Moreover, the fact that one could simply give money online without leaving one’s home, appealed to many people and the response was quite simply overwhelming. To date, Maya has raised the staggering sum of over four hundred thousand dollars for research into childhood cancers.

Poignantly, Maya’s commitment to ALSF also proved to be of help to her. She came into contact with a genetic researcher whose work had been funded by ALSF and the lady was able to conclusively determine that the two cancers with which she had been afflicted were totally unrelated and that Wilms’ Tumour had not been genetic at all in any event. This provided much relief to Maya and her family.

Whilst Maya is the first to admit that sustained bouts of chemotherapy and radiotherapy were far from pleasant, she asserts that her allegiance to this charitable cause gave her a sense of fulfilment and kept despondency at bay. She and her family were enthralled by the many donations from friends, family, acquaintances and complete strangers. It became a welcome and exciting distraction to watch the online website being updated several times a day to reflect the unbelievable number of daily payments being made to the charity.

Maya, in her inimitable modesty, is eager to praise the public for their magnanimity whilst deflecting all credit from herself.  It was, after all, she who had provided the impetus for the entire project.  Indeed, when asked what she would like to be when she grows up, Maya readily responds that she would like to be a philanthropist. She is seemingly totally oblivious to the fact that many would say that she has already achieved this goal now, at age thirteen!

Though this column is devoted to a woman of worth rather than a child of worth, Maya Rigler has achieved in thirteen years that which many do not accomplish in an entire lifetime.  She has displayed courage, compassion and concern for others, notwithstanding  her own immense pain and suffering. She is quite simply the embodiment of the words of Eshet Chayil – “She opens her mouth with wisdom, and the teaching of kindness is on her tongue”.