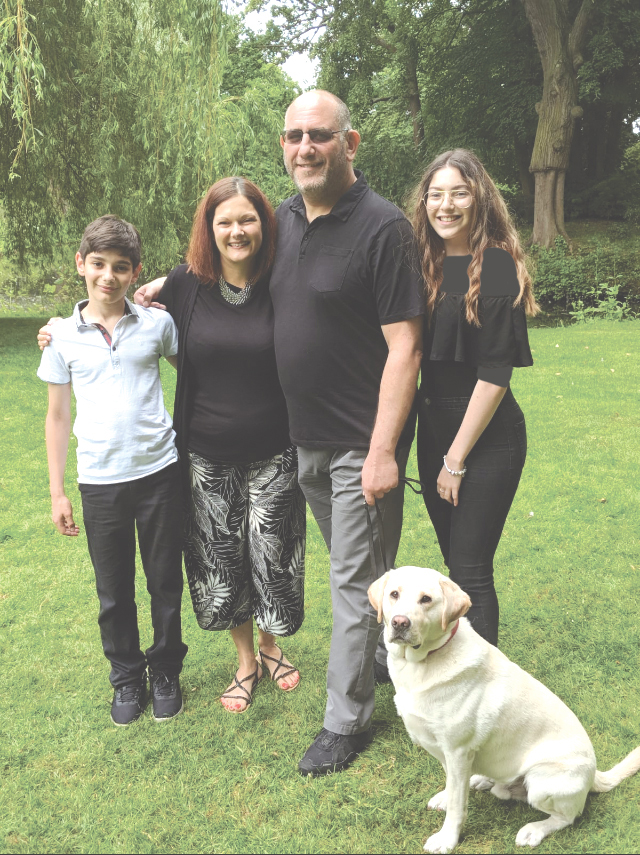 For many mothers, life can be a bit of a juggling act between work and home life, but for mother of two, Simone Mazin she also has to factor in regular hospital appointments and blood tests with her daughter, as well acting as the main carer for her visually impaired husband, in her busy schedule. But she wouldn’t have it any other way.

Simone’s daughter, Izzy is 15 ½ years old and has a form of Juvenile Arthritis which she was diagnosed with at the age of three. As Simone explains, “When Izzy got out of bed one day, she fell over, and we noticed that her knees had become swollen and painful, more so than was normal.” Simone and her husband Gary spent a lot of time seeing specialists trying to find a diagnosis, and finally were told that she had a particular type of arthritis called Oligo-articular JIA which affects around 1 in 1000 children. She also has associated uveitis which causes inflammation in her eyes and is connected to her arthritis. She has to have regular injections in her body in control the condition and blood tests every 8 weeks. She also has to use daily steroid eye drops to treat the inflammation in her eyes.  Izzy has always been determined to lead a normal life, and strives to achieve as much as possible in spite of her condition. Izzy recently took part in a two day Duke of Edinburgh expedition as part of her Bronze award, despite having had a flare up which meant that her ankles were swollen and she was in a huge amount of pain. As Simone explains, “She managed to finish and is hoping to gain her gold award next year. I think that she is really incredible, and although she has good days and bad days, she never gives up. She is truly amazing.”

When Simone first met her husband, Gary in August 1999, she was aware that he had issues with his sight and his hearing, but the pair got on so well from the first time they met, that she did not let it get in the way. After dating for only four months, they were engaged, and have been happily married for 17 years, and have two children, Izzy and 11 year old Ellis.

Gary has a degenerative condition called Ushers Syndrome which means that he is severely sight impaired and has hearing loss. He was first diagnosed at around 13 years old, and over the years his sight has deteriorated. For the past 7 years he has had a guide dog to help him get around and enables him to commute to his job at the RNIB in central London, helping to support partially sighted and blind people back into the workplace. As Simone explains, having the guide dog really changed things not only for Gary but for the whole family, “When Gary first got the guide dog it made such a difference, and gave him the ability to be independent. It also took the pressure off of me as I am much more relaxed when he goes out without me.”

Simone feels that her family are a close unit that works together, and they try not to dwell on the negative, and aim to live life to the fullest. Whilst she recognises that her situation may not be ideal, she does not want others to pity her in any way. “The last thing I want is for people to feel sorry for me, because I don’t feel sorry for myself. As a family, we don’t let these things bring us down, and our house is always filled with laughter. We are a team, and we learn from each other and help each other. Gary has a much more relaxed outlook on life, and I think that he has helped me to realise that some things are just not worth getting worked up over.” Simone feels that Gary has also helped her to focus on the positive, and it is this that she feels is important.

In her working life, Simone works for Jewish Blind & Disabled as Volunteers and Activities co-ordinator for the North East London area.  Jewish Blind & Disabled is the only Jewish charity dedicated to providing a life of independence, dignity and choice for any adult, from the age of 18 upwards, who is physically disabled or vision impaired. It enables this independent lifestyle via the provision of state-of-the-art mobility apartments, with 24/7 on site support from resident house managers. Without these unique facilities many of its tenants would have no choice but to live a life of dependence on others, or even be forced to move into residential care often at a relatively young age. Having grown up in the area, Simone enjoys working within the community and feels that it is close knit and very caring.  Her love of community and wanting to help has led her to take part in fundraising events for various different charities, including Jewish Blind & Disabled. She plans to take part in the 20 Bridge Challenge on 14th October this year, a 20 mile charity walk which covers all the major bridges of London from Kew to Tower Bridge. She also encourages her children to take part in fundraising. As Simone explains, “I really think that it is important to give back and to help the people around you.”

Living with someone who is visually impaired can be tricky in some ways, but she tries to ensure that they have as normal life as possible, and recognise their limitations, but don’t let them be defined by them. They enjoy holidays, and days out and doing other things as a family. This may take a little more planning or arrangement, but does not stop them. She knows that Gary hates to be pitied, and she admires and respects him for being able to achieve so much, and not letting his condition get in the way, and accepts it as part of him. As she explains, “Having the condition that he has, has made him who he is, and if he didn’t have those issues, then he would not be Gary, and I would not be me! I don’t think what I do is anything special, it has become second nature now. I am just looking after my children and my husband, and doing what I can to help them all.”