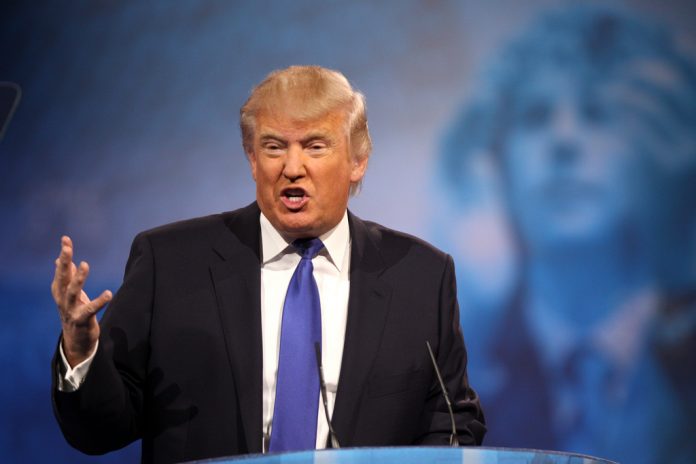 The city of Jerusalem was locked down on Monday as President Donald Trump and First Lady Melania made the historic trip from Riyadh in Saudi Arabia directly to Tel Aviv. After the pomp and ceremony along the red carpet with introductions to all government ministers and officials at the airport, the couple travelled by helicopter (Marine One) to the capital and landed in a car park in the German Colony neighbourhood.

From there Donald Trump and Melania were driven to the President’s Residence, where they were welcomed again by President Rivlin and his wife Nechamah. After the American president signed the guest book, the two leaders held a private meeting before being taken to the garden at the President’s Residence and shown an almond tree that was planted to mark the visit. A sign near the tree bears a quote in Hebrew, English and Arabic from the Book of Psalms: “Pray for the peace of Jerusalem: May those who love you be secure. May there be peace within your walls and security within your citadels.”

Back into the waiting cars, the Trumps were driven to the Old City for a private visit, spending three hours visiting the Church of the Holy Sepulcher and the Western Wall. This was the first time an American president has ever visited the Kotel, where they were accompanied by the Western Wall rabbi, Rabbi Shmuel Rabinovitch.

Israel had asked the American delegation to allow Prime Minister Netanyahu to accompany Trump on his visit to the Western Wall, but the request had been declined for political considerations.

More than 11,000 security personnel were present throughout Jerusalem on Monday. Many schools, businesses and offices were closed for the day.

The American couple were only in Israel for 28 hours, yet Israel’s security forces have been preparing for this historic visit for several weeks.
From the Western Wall, President Trump and the First Lady were driven to Hadassah University Medical Centre in Ein Kerem, where they talked with medical staff and met with children in the play area for a joint artistic activity.

It was then time to travel to the King David Hotel for the first time to meet again with Prime Minister Netanyahu for a private talk. Around 30 minutes later, their teams joined the meeting before dinner was called at 7.15pm.

Trump, Netanyahu and their wives travelled the short distance to the Prime Minister’s Residence for dinner, which was cooked by Israeli chef Moshe Segev.

While President Trump, the First Lady and the Netanyahus dined at the Prime Minister’s Residence, the rest of the American delegation, including daughter Ivanka, son-in-law Jared Kushner, Secretary of State Rex Tillerson and Defence Secretary James Mattis, dined at the King David Hotel with their Israeli hosts including Defence Minister Avigdor Lieberman.

The American delegation initially wanted to skip the ceremony in the hot midday sun and fly the president straight to Jerusalem immediately upon landing, but Israel insisted protocol had to take place.

In an effort to keep the ceremony short, Netanyahu tried to quickly move along the shaking of the hands with dignitaries. But controversial Likud MK Oren Hazan insisted on a selfie with President Trump, which slowed down the process. Netanyahu clearly looked embarrassed as Trump looked at the prime minister with a look that suggested he was thinking, “Who is this guy?”

Hazan later tweeted “Mr. President, welcome to Israel! I’m expecting your call; we have some issues to discuss.”

On Tuesday morning President Trump travelled to Bethlehem, which is controlled by the Palestinian Authority, and met with leader Mahmoud Abbas for talks.

The president was then driven back to Jerusalem, where he spent 30 minutes at the Yad Vashem Holocaust Museum and laid a wreath.

Trump then headed to the Israel Museum, where he delivered his main speech outlining his vision for a peace deal between Israel and the Palestinians and expressed his support to the people of Israel. Thus he concluded his visit.

The Trump family then left Israel for Rome on Tuesday afternoon.