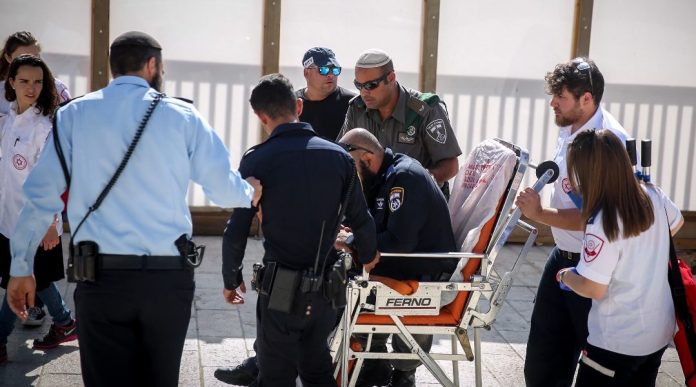 Two Israeli Police Officers were killed and one lightly wounded after they were attacked this morning next to the Lions Gate in the Old City of Jerusalem, near the entrance to the Temple Mount.

The three attackers were pursued, shot and killed in an exchange of fire with Israeli police officers next to the Temple Mount. Although there have been numerous attacks in and near the Old City, particularly at the Damascus Gate, attacks near the Temple Mount are very rare.

The attackers were armed with Carl Gustav style automatic weapons and an automatic pistol. Israeli Police have confirmed that all three were from Umm el Fahm in Israel.

Erdan called the attack “an extremely serious event which crossed all red lines. We will need to re-evaluate security arrangements on the Temple Mount and its environs. I call on all public leaders to act to calm the situation and ensure quiet in Jerusalem.”

On 16 June 23-year-old Police Sergeant Hadas Malka, was stabbed to death in an attack near the Damascus Gate.

Since September 2015, 47 Israelis, a Palestinian man, two visiting Americans, an Eritrean man and a British student have been killed in a wave of attacks by Palestinian assailants, mainly in stabbing, shooting and car ramming attacks.