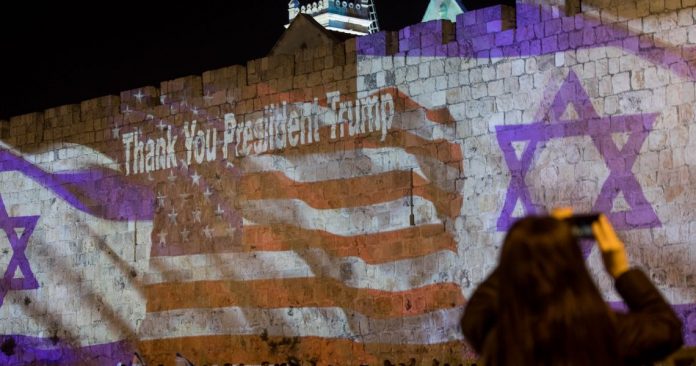 The US will open its new Embassy in Jerusalem later today at a VIP ceremony attended by 800 people.

An American delegation of more than 250 people arrived in Israel yesterday to attending today’s event. The delegation is headed by Deputy Secretary of State John Sullivan and includes Secretary of Treasury Steven Mnuchin, US President Donald Trump’s daughter Ivanka, his so-in-law Jared Kushner, US Special Representative for International Negotiations Jason Greenblatt and 40 other senior officials.

Trump announced the move last year, officially recognising Jerusalem as Israel’s capital. The new US Embassy will inhabit the existing US consular building and will officially open at 4 pm local time during a ceremony led by US Ambassador to Israel David Friedman. Trump will address the ceremony by video.

Israel said all 86 countries with diplomatic missions in the country were invited to the ceremony, and 33 confirmed they would attend. Most EU Ambassadors have declined to attend, apart from Austria, Hungary, the Czech Republic and Romania.

The EU mission in Israel said on Friday that the EU would “respect the international consensus on Jerusalem … including on the location of their diplomatic representations until the final status of Jerusalem is resolved”.

The Jerusalem District Police have deployed thousands of extra policemen, Border Police officers and volunteers to secure the opening of the US embassy on David Flusser Street in the West Jerusalem neighbourhood of Arnona. In the longer term, the Embassy is expected to be built on the large adjacent site of the Diplomat Hotel, which was bought by the US in 2014. The current Consular Section and Diplomat Hotel are located in a Jewish area of Jerusalem continuously controlled by Israel since 1948-49.

Guatemala and Paraguay have announced that they will move their embassies to Jerusalem within the next ten days and Foreign Ministry Director General Yuval Rotem has said that 12 countries in Asia, Africa and Latin America were also holding talks with Israel on possibly moving their embassies.

Palestinian Authority (PA) President Mahmoud Abbas has criticised the move and broken ties with the Trump administration as a result. He said the move “has resulted in the US being unable to serve as a mediator in future negotiations”. Recent media reports suggest that the US is planning to unveil its peace plan shortly.