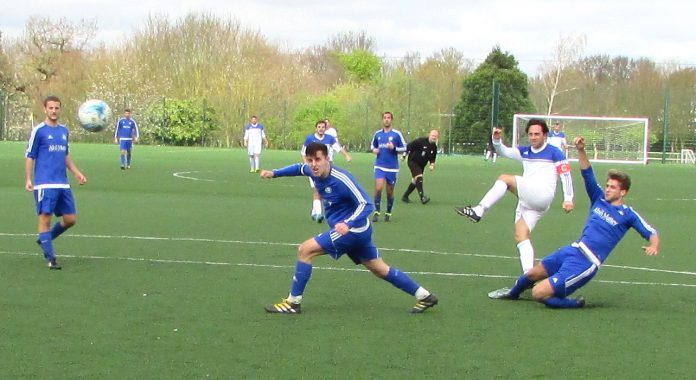 Redbridge Jewish Care B skipper Brad Gayer sealed the Maccabi GB Southern Football League Division One championship with a stunning strike against Maccabi London Lions B at Rowley Lane on Sunday.
Gayer’s second half goal and Jack Van Gelder’s first half effort had put Redbridge into a 2-0 lead before Adam Abadi reduced the deficit. But Sam Rank’s team stood firm against their main challenges to seal the title. Redbridge can now prepare for Premier Division football next season. “The boys were outstanding, everyone worked their socks off and showed what we are all about,” said Rank. “We have an unbelievable work ethic and are a great squad, unit and family. These are great times for both club and team.” Rank praised his coaching staff and everyone connected to the club. “To do something that I love and am passionate about is priceless,” he said. “It’s a brilliant achievement for us all and this was a great day for the Redbridge club and team.”
“We’ve worked so hard this season and it’s paid off,” commented skipper Gayer. “It was all about having that extra energy to compete with Lions who are the fittest team in the league. They play the ball, pass the ball and wear you out but we knew that if our time came today we’d take it and we did. We knew Lions would be our only competitors this season as they were the only team to beat us this year, but we felt confident today. It was in our hands and our league to win.” He carried on to say, “I promised the boys I’d be top of goals and assists pre-season. Achieving both is great and this goal meant the world to me. It was a very special moment but more importantly so for the team. Winning meant so much to us all.”
Lions enjoyed plenty of possession in the first half but Redbridge looked dangerous on the counter attack. Gayer went close to breaking the deadlock but it was Van Gelder who finished clinically after being sent clear by Adam Goldman on 35 minutes.
Redbridge stoppers Jordan Sapler and Dan Andrews were rocks in defence as Lions pushed for an equaliser. And with midfield trio of Adam Noble, Daniel Bean and Kane Hopps controlling the game, a second goal seemed to be on the cards.
The champagne moment arrived when Gayer controlled a Hopps pass, turning brilliantly, before volleying home into the top corner on 78 minutes. Lions hit back four minutes later through Abadi but the visitors were not to be denied a deserved triumph amidst wild celebrations on the final whistle.
After a long hard season, it is nice for all the efforts to pay off and they can look forward to their summer break as champions before next season kicks in.